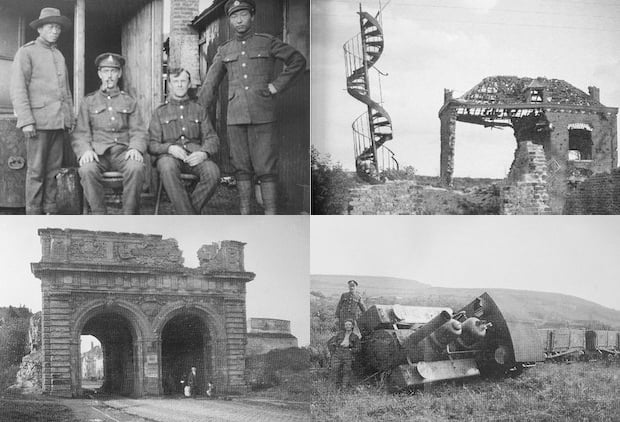 Britons are seeing a new side of the nation’s World War I experience thanks to the publication of a small treasure trove of negatives that were only recently discovered tucked away in someone’s attic.

Peter Berry Ottaway of Hereford was cleaning out the attic of his grandfather Hubert Berry Ottaway’s home when he discovered a rusty box filled with 50 undeveloped negatives. After several years of research, he was able to develop and get usable prints out of 40 of the negatives.

The photos, taken with a Kodak Brownie box camera, document his grandfather’s WWI service in France and Belgium. The images show fellow soldiers, destroyed buildings, heavy weapons and more. Particularly interesting to historians are rare images of the Chinese Labour Corp, a brigade of men recruited from then British territories to do manual labor during the war.

“The negatives give a real insight into what it was like back in World War I and my family are thrilled that they can see them,” Ottaway told the Hereford Times. “They were just sitting in a loft all this time and we simply had no idea about them; they have been up there for almost a century and no one had mentioned them.”

One reason the elder Ottaway may have forgotten the film is that he slowly lost almost all of his eyesight in the years following the war because of an artillery blast.

The photos are collected in a newly published book, “A Sapper in Flanders: 1914-1919.” You can catch high res samples over on The Daily Mail.