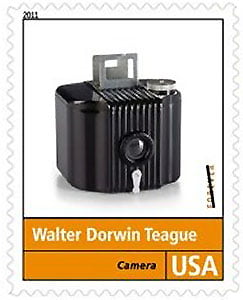 The USPS has unveiled a new set of stamps called “Pioneers of American Industrial Design” that honors 12 of the most influential American industrial designers of the 20th century, and one of them is Walter Dorwin Teague:

Known as the “dean of industrial design,” Walter Dorwin Teague believed that good artistic design fit both form and function into a single aesthetic package. During his career-long collaboration with Eastman Kodak Company, he designed several popular cameras, including the 1934 “Baby Brownie” (shown on the stamp). [#]

Besides designing cameras for Kodak for 30 years, Teague also worked for the likes of Boeing and Texaco, becoming one of the most prolific industrial designers in US history.

Leaked Photos of the Panasonic GF3