Here’s a really neat DIY idea for those of you who shoot and develop your own film, and also happen to love playing with LEGOs (that’s everyone right?). Using LEGOs and a bit of ingenuity, Dutch photographer Jan van den Broek built a semi-automatic film processing rig.

Of course, as you might have already guessed, these aren’t your standard LEGOs. To build his rig, van der Broek used LEGO Mindstorms, which come equipped with motors, sensors and gears, and can be programmed to do your bidding via a ‘brick computer’ known as the RCX.

Using these programmable LEGOs, van der Broek programmed a little car to move above five containers full of developing chemicals — a pre-soaker, a developer, a bleach tank, a fixer and a stabilizer — and slowly dip and agitate the attached film in each of the five baths individually.

Here’s a look at van der Broek’s contraption in action: 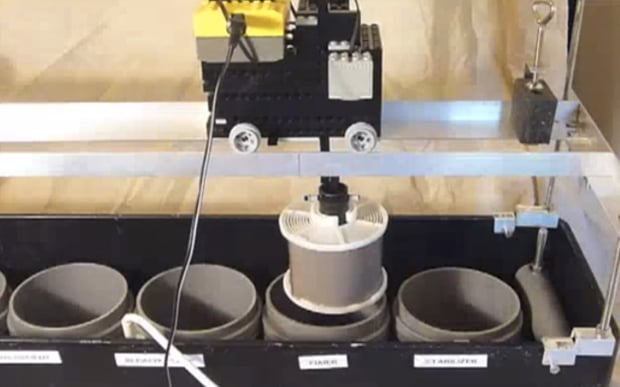 Unfortunately, van der Broek realized shortly after putting the first version online that an automated system like this wasn’t really viable for him given how infrequently he shoots film. As such, the contraption you see in the video at the top is still at “version 1,” so to speak.

Still, for the DIYers out there, there should be enough info in the video and on van der Broek’s website to get you started. And if you do build your own, shoot us a message on Facebook or in the comments down below with a link — we’d love to update the post and show off your creation!

New England at Night: An Interview with Bob Avakian