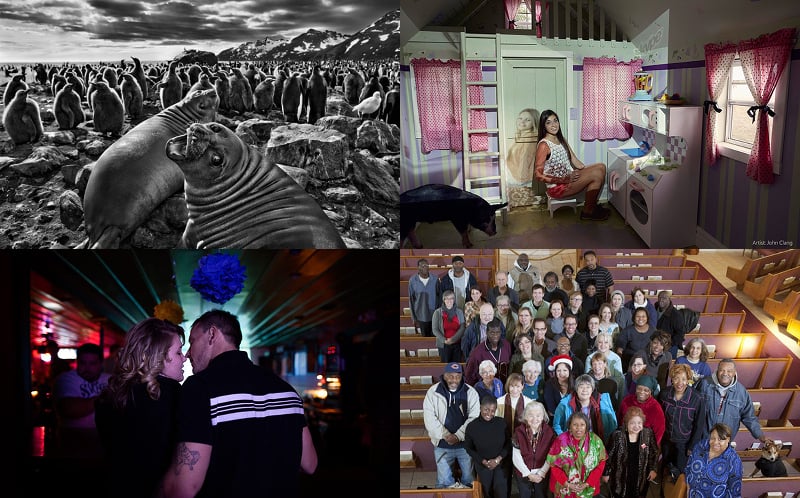 It’s that time of the year when we all take a moment to reflect back on the major events that will forever be remembered, the trends that changed our zeitgeist, and the pop culture phenomena that will soon be forgotten.

For the photo industry, this was the year that the word “selfie” was coined Webster’s Dictionary’s word of the year. In such a context and with so much of the conversation focused on the mobile photo taking frenzy, it almost started to get a little too easy to overlook the stories out there that, if not for the photograph, would not have been told nor raised in our collective social consciousness.

On the flip side, the widespread recognition and overwhelming positive response these stories received could have only happened in 2013. With social networks, virtual best friends, and advances in media technology, these stories were meant to happen this year. We celebrate the series of works below as a testament to the power of the still image, the stories that stand behind them, and the photographers that had the courage to tell them — and the thousands, if not millions, of people that shared them with their worlds.

For years, photojournalist Gillian Laub has been documenting issues that young American men and women deal with today. From child beauty pageants, to segregated high school proms in the South — her stories are focused on American family culture.

This year Laub released the multimedia piece “A Perfect Daughter” which tells the story of Nikki, an 11-year-old girl who was biologically born as a boy, and has been going through the complicated transition of becoming the girl she has always felt like. PEOPLE magazine commissioned Laub for the piece, which gave her work a platform that could touch the hearts of thousands. Laub approached this often hidden, difficult subject with grace, telling Nikki’s story in a moving, touching, and simple way. See the photo series here.

Sitting at the top of several ‘favorite photo books of the year’ lists is Sebastiao Salgado’s Genesis. After his project, Migrations, which documented families across the world who are uprooted due to war zones, poverty and repression, Salgado was spent emotionally and physically. He switched gears and focused his energy on reforesting his cattle ranch in Brazil, a piece of land his grandfather had given him. His efforts produced more than 2 million new trees, animals returned to the land, and the ranch has become a designated nature reserve.

All this work helped Salgado realize his next project, which “would not be to photograph what is destroyed but what is still pristine, to show what we must hold and protect.” Genesis is a magnificent look at the world’s natural beauties, and is what Salgado calls his “love letter to the planet.” These powerful images help remind us that we must be kind to our planet, and preserve its resources.

Winner of both the 2013 Student Alexia Foundation and Ville de Perpignan Rémi Ochlik awards, Sara Naomi Lewkowicz’s photo series and multi media piece “Shane and Maggie: An Intimate Look at Domestic Violence” reached a large audience this year. The series tells the story of Maggie and Shane, a couple whose relationship — unbeknownst to Lewkowicz when she met them — was taking a fast, downward, and dangerous spiral.

Photographing the couple after only 1 month of dating till their end, Lewkowicz’s images tell the story of a domestic struggle (and ultimately violence) rarely captured and revealed over the course of time. Lewkowicz’s unlimited access to the family allowed her to publicly show what usually happens behind closed doors, and resulted in a powerful series that shed a new light on an issue often overlooked because of its hidden occurrences.

Photographer John Clang wanted a way for families in Singapore to continue the tradition of taking formal family portraits even when some of their members had moved away to other towns, cities or countries. With this in mind, Clang devised a plan to place a life-size, real time projection of the abroad family members on walls to complete the missing pieces. His series “Being Together” took off and went viral — but he had no idea the impact it would have.

Moved by the series, Skype got in touch with Clang to help create a contest to bring together families and friends who depend on Skype every day to stay in touch with their loved ones. People from all over the world submitted their stories, and finalists won a portrait taken by Clang of their family. But the ultimate winners of the contest got an all-expenses-paid trip to see their loved one — and the two girls who won had an incredible story.

The winners, teenagers Sarah and Paige, were both born with only one arm. Their mothers — looking for both moral and emotional support — found each other online before their daughters were born. The mothers lost touch, but Sarah and Paige, located in Indiana and New Zealand respectively, have been digital best friends since they were 8 years old. The kicker? Sarah and Paige had never met. Because of Clang’s work, the two girls were able to meet each other for the first time ever and strengthen a friendship that was already, as Paige describes, like “a long lost sister” she never had.

In 2013, the artists involved in the Tamms Ten Year Campaign finally got some peace of mind from their long-time struggle to shut down the supermax isolation prison, Tamms. The photo project, Photo Requests From Solitary, answered the question: what would prisoners who have been in solitary confinement for over 10 years want to see? It not only stirred a sense of humanity for a group of people that many, including legislators, merely referred to as “inmates” or “prisoners”, but it also helped those in confinement feel a connection to the outside world many hadn’t had in years. While the resulting images vary greatly in subject matter and stand strongly as a body of work, it is the story behind the entire Campaign effort that is truly awe-inspiring.

In 1998, Illinois built Tamms Supermax prison, a place for what is termed “sensory deprivation.” Prisoners were not allowed visitors, phone calls, or other human interaction. Meals were served through a slot in the door, and workouts were done in solitary in a concrete pen. The prison’s original intent was to be a one-year shock treatment for the most dangerous of prisoners — but 10 years passed, and a large number of the prisoners had not yet been released. The isolation caused many inmates to suffer from mental illness, self-mutilation, and attempted suicide.

The Tamms Poetry Committee was created in 2006 to write letters and create some kind of human contact for the prisoners within Tamms, and two years later the Tamms Ten Year Campaign was launched to raise public awareness about what many considered to be the excessive punishment and mistreatment that was happening at the prison. This new form of “Legislative Art” by the Poetry Committee aimed to work with government systems to change the prison policies and hold those responsible accountable for the emotional and physical states the prisoners at Tamms were in.

The images that comprise ‘Photo Requests From Solitary’ came from the work of photographers all over the country. With permission of the Department of Corrections, Tamms inmates were able to make a request for a photograph of anything they wanted, either real or imagined, and the request would be distributed to the group to find a volunteer to fulfill it. With support from the Open Society Documentary Photography Audience Engagement Grant and the Sullivan Galleries at the School of the Art Institute of Chicago, the Tamms Committee had help to spread the word. The photography work was shown and highlighted at this years Photoville NYC, and received coverage on Gawker, Buzzfeed, The Daily Beast and more.

On January 4th 2013, Tamms Supermax was shut down. The Committee announced upon hearing this news they were “going through stages of relief, disbelief, celebration and reflection.” But their work is not done — they are now learning “what men need in the aftermath of Tamms and combating the new onslaught of negative rhetoric.”

What photo story impacted you this year? Leave us a link in the comments to a story that resonated with you on an emotional level, changed your thinking on a subject, or made you take action.

Most Instagrammed Locations and Cities of 2013 Revealed, as Well as Most-Liked Photo