Those with delicate constitutions where the destruction of photography gear is concerned should look away or skip over this one. Whatever you do, don’t press play on the video above… or if you do press play, don’t watch past about the 3:50 mark, because that’s when things get ugly.

The video features photographer Chase Jarvis, who was recently shooting with a DJI Quadcopter in Iceland when he and his team decided that they would hack the machine and mount a Sony RX100II camera on the drone instead of the standard GoPro it’s meant to carry.

The camera would be controlled from the ground using an iPad Mini and Sony’s PlayMemories app — so far so good. Well, good until this happened: 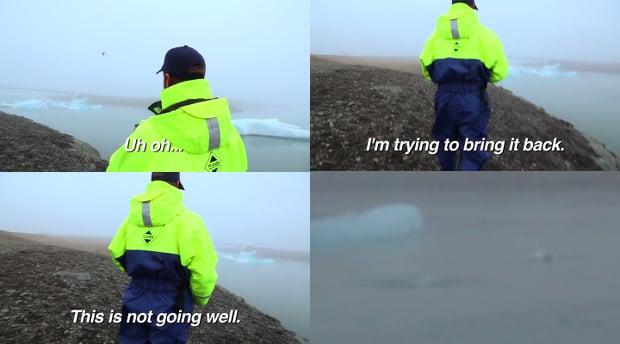 We told you it would get ugly, you have only yourself to blame if you watched the whole thing… As you can see, after modding the Phantom, Jarvis loses control of the drone and is forced to watch, helpless, as the poor thing plunges into icy Icelandic waters while still attached to his RX100II.

The moral of this story? Well, as Jarvis puts it on his blog, “I don’t encourage people to go out and perform needless hacks and unsanctioned upgrades, especially if you’re not insured, like we were.” Even when you don’t mod them in unsanctioned ways, camera drones occasionally fail… it’s a fact of life.

You can head over to Jarvis’ blog to read the full story, but before you do, be sure to read over the above quote a couple of times… lest you find yourself down well over a grand in gear thanks to some ill-advised modifications.