Flipping through the pages of National Geographic might give aspiring shooters the impression that the magazine’s photographers never run into issues. Many years of experience and incredible talent combine for a seamless photo experience where accidents never happen, right? Not really…

In the clip above — originally published on the National Geographic blog PROOF — at first everything seems to be going well for Nat Geo’s Carsten Peter, who is currently on assignment in China following a team of North Face climbers (seen around 38 seconds in) as they explore and climb karst formations the world over.

But then, while Peter and remote imaging engineer Brad Henning are trying to bring the copter back in, it stops responding to controls, plummeting to the ground in the middle of China’s Enshi Grand Canyon. This is what Peter found when he finally tracked the helicopter down: 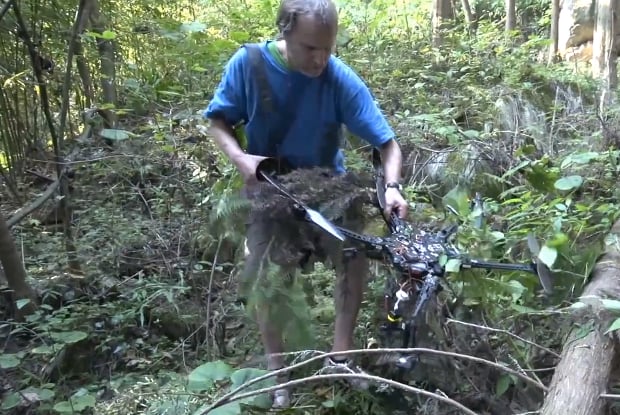 Yeah, it’s not pretty… but according to the PROOF article, this story has a happy ending! Despite the camera gimbal being broken off, three broken copter arms, cables ripped and in shambles, retractable landing gear toast and much more, they managed to fix it!

You see, things go wrong on National Geographic assignments all the time — paragliding Nat Geo photog George Steinmetz once crashed into a tree during takeoff — the question is, how do you react to these challenging situations? Peter and Henning fixed what looked to be a hopeless wreck of a drone copter, and Steinmetz was back in the air the next morning.