Yuri Arcurs, the world’s top-selling microstock photographer, will go to great lengths to prove he’s right, and the video above is a great case in point for that. He wanted to prove that he could flash freeze a fighter jet at full speed, and he got that shot. All he needed was approximately 30,000W of fill flash… no big deal.

For those unfamiliar with how studio lighting usually works, 30,000W is as much as 100 times more flash than you’re going to typically use in a regular studio setting. So much flash power is being thrown at this jet that the people on the ground can actually feel the heat from the lights.

Apparently, the project started as “a heated in-house discussion about flash speeds [and] ended up becoming a rather BIGGGG experiment…” An experiment that ended with Arcurs getting his shot and proving his point: 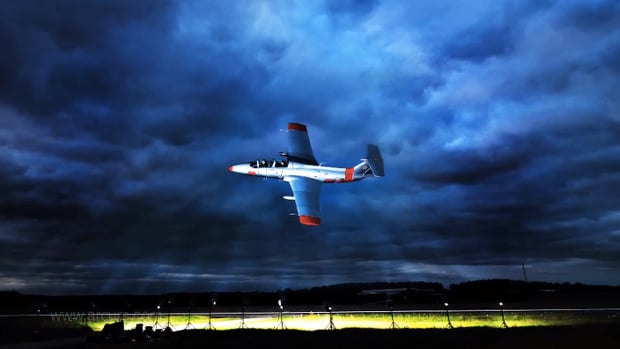 And lighting wasn’t even the only challenge Arcurs had to overcome. Many commenters on both YouTube and Reddit ridiculed his choice to use a Hasselblad because of its crazy long shutter delay. Arcurs responded to critics on YouTube by saying:

So what do you think? Was this just overkill, or as one Redditor put it, “highly impractical and underwhelming”? Or did you enjoy Arcurs’ video and think the final shot was worth the trouble? Also, how would you have approached this challenge differently? Let us know in the comments down below.

Finds
fighterjet, flash, stockphotography, yuriarcurs
Related Articles
Discussion
Trending Articles
Milky Way Explodes Into View During Lunar Eclipse
May 18, 2022
The Science Behind Why Watches are Set to 10:10 in Advertising Photos
May 17, 2022
Wedding Photographer Tells Couple to Act Drunk, Gets Amazing Portraits
6 hours ago
Eerie Photos Reveal Last Moments Before Women Vanished in Panama
May 19, 2022
Blood Moon, Aurora, and Milky Way Captured in One Photo
May 19, 2022