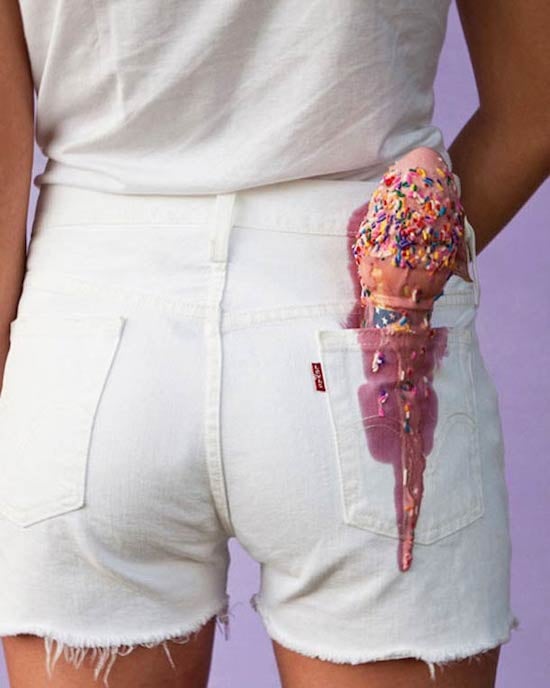 Living in Alabama, one of the more frequent pieces of trivia I hear mentioned at social gatherings has to do with ridiculous state and city laws that are so ludicrous as to be unbelievable. The thing is, these laws exist, and not just in the great state of Alabama.

In her creative and humorous photo series I Fought the Law, photographer Olivia Locher exposes some of the most ridiculous ones you’ll find across the US.

So far Locher has only covered eight laws (one of which is NSFW and therefore not something we’ll share here) but each photo she takes shows someone breaking a ridiculous law in the most absurd way possible, piling absurdity upon absurdity and making the photographs that much more entertaining.

The photo at the top covers an Alabama law I’ve actually heard mentioned by friends several times: it’s illegal to have an ice cream cone in your back pocket in Alabama at all times. Can’t even count the number of times I’ve been burned by that one… if only I’d remember to keep my ice cream in my front pocket.

Here’s a look at the rest of the series (minus one photo, which you can find on her website):

If you’re hungry for more ludicrous photos, or you just want to learn about more ridiculous laws, have no fear: the series is ongoing. In fact, according to Feature Shoot, Locher intends to mock humorous laws across all 50 states before she’s said and done.

To see more of Loher’s work, be sure to visit her website by clicking here.

Image credits: Photographs by Olivia Locher and used with permission.

NASA Releases First Ever Photo of Saturn, Venus, Mars and Earth in the Same Shot