If you’ve been to a play or other event put on by your child’s elementary school recently, you might have experienced something similar to what the Nokia ad above depicts. Meant to tout the prowess of the Lumia 1020, it does a better job at showing just how close we’ve gotten to ridiculous when it comes to smartphone photography.

The whole point of the ad is that everybody in the auditorium has to fight to get a decent picture of their kid on stage, because your typical smartphone cam just can’t do its job if you’re even a couple of rows back.

Immediately, everybody starts fighting to crawl over one another, and even though the ad purposely dips into the ridiculous, there are some eerily accurate aspects to the commercial. For one, not a single person in the audience is actually watching the kids… they’re all watching their phones. 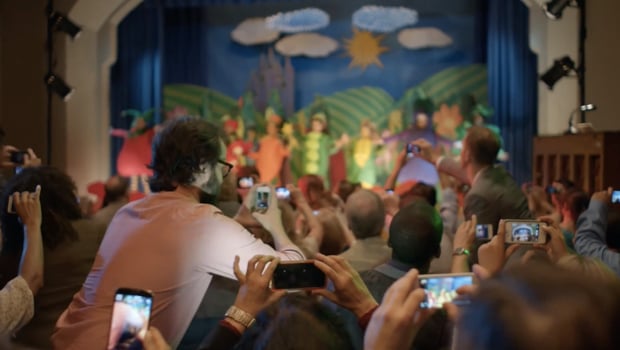 In the end, the point is that the Lumia 1020 owner was fortunate enough to avoid the melee because he’s got 41-megapixels to work with (no mention of the 12 rows of cell phones in front of him that would have blocked his shot unless he was 7 feet tall… but we digress).

The sad fact is that if you go to just about any performance, you’re likely to be greeted by a sea of twinkling smartphones between you and the stage. Maybe having a 41MP smartphone would help in that scenario… then again, what if you just watched the show?

Check out the video at the top to get a little laugh this Labor Day, and pay attention at the next event you go to. You might find some of the ridiculous characters in the ad (e.g. the panorama guy) frequently make appearances in real life.

Oppo Working on Attachable Smartphone Lens Cameras of Its Own