Most of you have seen this video, of that we have no doubt. In the 5 days since it debuted it has acquired over 9 million views, and so we’re not sharing it because we’re worried that you’re missing out on something, or even because we want to give you an excuse to dance a bit today (although that did factor in).

We’re sharing it because, as it turns out, this video has a pretty awesome story that involves very little money and oodles of creativity coming together when initial plans fell through.

On the off-chance you’re not familiar, the video above shows a cappella group Pentatonix singing a Daft Punk medley, and was shot by independent film house FifGen Films. What’s cool about it (beyond the epic a cappella singing) is that what you’re seeing is what they came up with when they had to improvise. 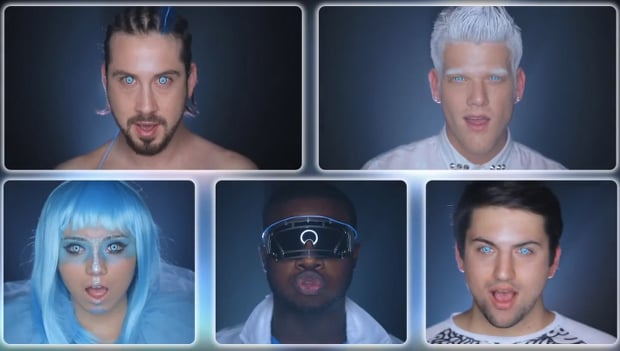 Speaking with David Hobby over at Strobist, FifGen cofounder Jimmy Bates explained that, when the location they had planned fell through, they had to call an “audible” and wing it. “We’re pretty used to the whole smash and grab style,” Bates tells Hobby. “We use the resources we have… well, we don’t really have any resources. We’re always trying to invent ways to do cool new things.”

For this video all they had was some black sheets, a couple of $250 Stellar CFL ring lights and a black light — mix that up with some creativity and an unshakeable trust in their ability to take a difficult situation and create something “ten times better” than they originally intended when they shoot off the cuff, and you’ve got a YouTube smash hit.

There’s more to the story than the TL;DR we gave you above, so if you want to learn more about the group and hear more about how the video came together, be sure to head over to Strobist and read his full write-up.