What better subject for a time-lapse than 700+ colorful bags of hot air rising into the sky all at once, many of them shaped like beloved (or infamous, see Darth Vader) pop culture characters? Well, there’s probably something better, but right this second we can’t think of it.

The time-lapse above was put together for Roadtrippers at Albuquerque, New Mexico’s 42nd Annual International Balloon Fiesta. It’s a 9-day hot air balloon extravaganza that is, in fact, the largest hot air balloon festival in the world! (Go ahead, start planning next year’s trip…)

In order to capture all of the footage he wanted, photographer Joel Schat had to get up at 4 in the morning and hunt down the row of balloons known as the “dawn patrol” (the first balloons to go up and check wind conditions). After that he found the best possible vantage point for the main event: Dawn Ascension. 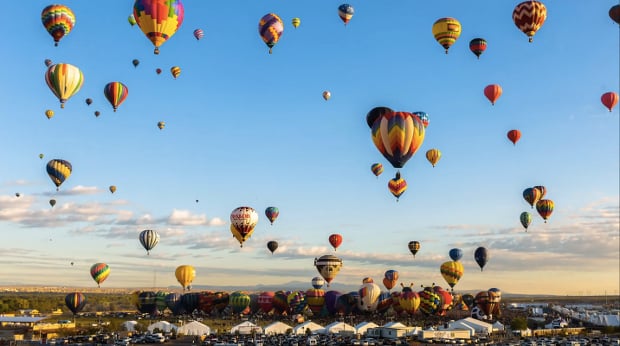 That’s where over 500 hot air balloons — basically everybody except the dawn patrol — take off in the span of about an hour and a half, turning the sky into a dreamy, colorful mess of hot air awesomeness (I think that’s the technical term).

It really is a sight to behold, and might help put a smile on your face and get you to the other side of yet another hump day. So check out the video for yourself, and if you want more details, head over to the YouTube video itself for a more details in the description.

Finds
balloons, hotairballoons, joelschat, roadtrippers, timelapse
Related Articles
Discussion
Trending Articles
Wedding Photographer Tells Couple to Act Drunk, Gets Amazing Portraits
May 20, 2022
Blood Moon, Aurora, and Milky Way Captured in One Photo
May 19, 2022
The Science Behind Why Watches are Set to 10:10 in Advertising Photos
May 17, 2022
Milky Way Explodes Into View During Lunar Eclipse
May 18, 2022
7 Tips for Photographing Dreamlike Landscapes
May 19, 2022