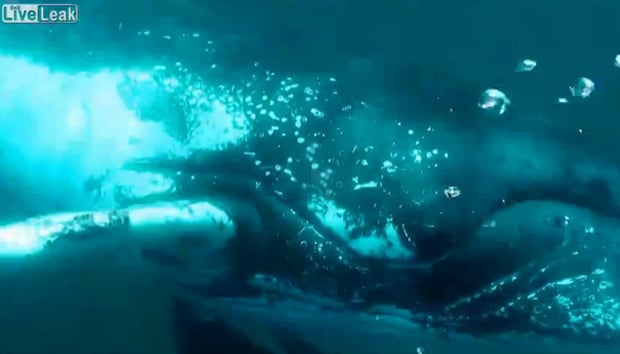 The squeaks and grunts whales make are still mysterious, but at least now we know what whale-speak is for “Get that thing out of my face!” That would be thanks to diver/photographer Chris Coates, who had a close encounter of the paparazzi kind while observing humpback whales off the eastern coast of Africa recently.

Coates had seen a number of whales over the course of the day, so he wasn’t too surprised when he saw a mother and calf headed toward him, vocalizing loudly.

He started to worry, however, when the whale kept on course and swam to within a foot of him, at which point the humpback waved a flipper, knocking his camera askew and giving him a good barnacle scrape on the forehead. (It’s hard to tell whether the agitated squeal at this point is coming from the whale or the photographer.)

“The slap with the fin was quite hard, but I don’t think it was trying to hurt me or it would have been way harder,” Coates told streaming media site JukinVideo. “You will be amazed at some of the crazy stuff we see out there. This, however, ranks with some of the craziest I have ever seen.”

Add this to yesterdays bear vs. camera footage and nature photographers may want to think about switching to safer targets… such as supermodels and NBA stars.

P.S. If you’re into close calls with whales, be sure to check out this footage that shows what it’s like to almost get eaten by one…