A humpback whale swam 3,100 miles (5,000 kilometers) with a broken back that was monitored with drone cameras.

Moon the humpback lost the use of her tail meaning that was “literally doing the breaststroke” on her long journey.

In September, a drone captured Moon as she passed the Fin Island Research Station off the coast of British Columbia, Canada. Researchers at BC Whales, who operate the station, immediately recognized there was something seriously wrong.

“It was one of those ‘oh my God’ moments when we learned it was Moon. It’s not like she has scoliosis or something that just came out of the blue — she was struck by something pretty hard,” CEO and lead researcher Janie Wray tells The Guardian.

“I’ve never seen anything like that in my lifetime as a researcher.” 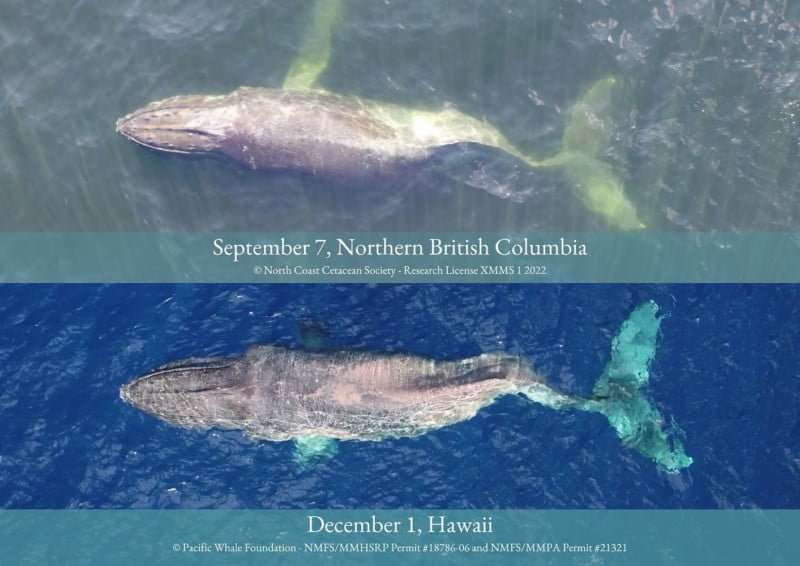 The team at BC Whales is certain that Moon was stuck by a vessel due to the unnatural S bend in the spine.

On December 1, another drone operated by the Pacific Whale Foundation (PWF) captured Moon off the coast of Maui, Hawaii — over 3,000 miles away from Canada.

“The harrowing images of her twisted body stirred us all. She was likely in considerable pain yet she migrated thousands of miles without being able to propel herself with her tail,” BC Whales writes on its Facebook page.

“Her journey left her completely emaciated and covered in whale lice as testament to her severely depreciated condition. This is the stark reality of a vessel strike, and it speaks to the extended suffering that whales can endure afterwards.

“It also speaks to their instinct and culture: the lengths whales will go to follow patterns of behaviour.”

Humpback whales reach nearly 50 feet long and weigh a staggering 90,000 pounds. They are known for the epic journeys they undertake each year, traveling from the icy waters in Alaska to the warmer waters in Mexico and Hawaii where they breed and give birth.

BC Whales began utilizing drones to further their research on whales in 2019.

The drones are equipped with LiDAR which emits a regular laser pulse and records the length of time it takes for this laser pulse to bounce off a surface and come back into the LiDAR device.

“This LiDAR kit allows us to know the exact height of the drone above the sea surface, and in combination with footage of the whales from directly above, means we can calculate the size of each individual, both in length and width,” BC Whales writes on its website.

As well as taking photos, the drones can also collect snot samples from the whale’s exhale. This non-invasive technique means the team can collect a genetic sample without ever making direct contact with a whale.

For Moon the humpback whale, she is tragically facing a slow death.

“We know she’s not coming back to see us again. She is going to pass soon and we all feel: the sooner, the better.

“If she was on land, we could intervene. But because she’s in the ocean, and because of her size, there is nothing that we can do. And that just breaks your heart even further into pieces.”

“Even if you’re really a focused boat driver, you could accidentally hit a humpback whale because they will just come up in front of your boat,” adds Wray

“The most important thing to do is everybody needs to slow down, especially in areas where we know there are whales. It’s easy – just slow down. We have school zones. We need whale zones.”