In an attempt to show off just how powerful its Snapdragon 600 processors are, Qualcomm decided to go all Matrix on the people of Venice, CA and New York City. They did this by putting together an impressive 130-smartphone 540° bullet time photo booth using only HTC One smartphones.

They call it the Snapdragon Booth, and like any photo booth, after it was set up it was just a matter of time before volunteers started using it. Of course, that’s where the similarities end, because the photo booth at your local theatre has nothing on Qualcomm’s creation. 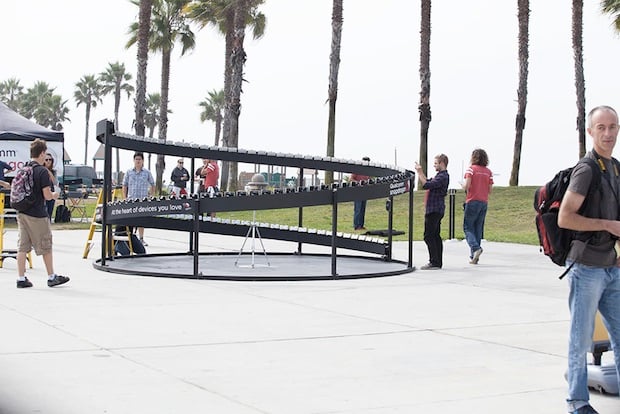 The video at the top shows some of the shenanigans the Qualcomm folks got up to in Venice, CA. Everything from skateboarders doing tricks, to jumping dogs, to a little bit of Hadouken made it into the booth to get frozen in time.

And much of what didn’t make the video did make it onto the Snapdragon Booth website where the 540-degree bullet-time footage was turned into GIFs for your viewing pleasure. Admittedly, the results are a tiny bit shakier than what we’re used to seeing from, say, a GoPro or DSLR rig. But considering the fact that these are smartphones and not dedicated cameras, Snapdragon managed to put something pretty cool together here.

To find out more about the booth, see more pictures, and browse all of those animated GIFs we told you about, head over to the Snapdragon Booth website by clicking here.

Hashbag: A New Site that Turns Instagram Into the World’s Weirdest Shopping Mall