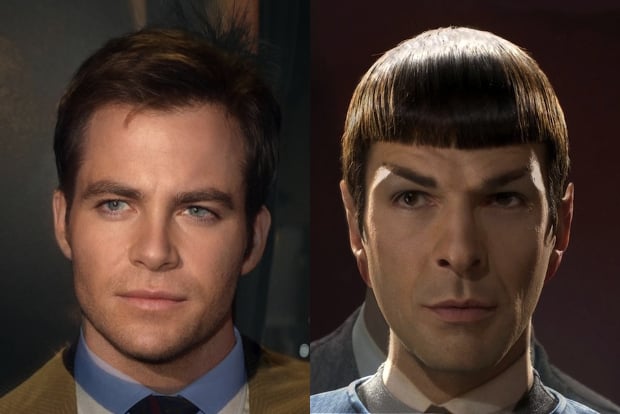 Well, here’s one for the Trekkies… yes, I’m looking at you Cheri. Reddit user and Star Trek enthusiast Pedro Berg Johnsen (better known as ThatNordicGuy) took it upon himself to blend the faces of the Star Trek: The Original Series stars with their modern-day counterparts.

The resulting images have sparked some interesting conversation about how good a job the casting directors of the new Star Trek films did. Many of the actors blend together incredibly well.

As you might expect, the whole thing started as a fun personal project. Answering questions on Reddit, Johnsen explains:

I did the Kirk-morph for my own amusement after seeing the new Star Trek films the other day. I decided to post them [on Reddit], thinking someone might like them. Soon I had 20,000 views on my morph, so I decided to do more of them. To begin with, I was just going to do 2-3, but things got out of hand pretty fast.

To create the morphs, he uses a free program called Sqirlz Morph, which he warns users to be wary of, as downloading it might come with some adware. He then touched up and resized the final morphs in Photoshop. Here’s what he came up with:

The trickiest part, said Johnsen, was getting the facial texture right, “what lines go where, how wrinkles work, and so forth.”

As to what the future holds, now that he’s running out of Star Trek cast, he already set about doing the same thing with Professor X and Magneto using the old(er) movies and X-Men: First Class.

If you’d like to see more of his work, or follow him as he continues to do more actor morphs, head over to either his DeviantART or Reddit profiles by clicking on the corresponding links.

Lifelogging Camera Maker Memoto Has a New Name, $3M in Capital and a Ship Date