We’ve seen a few interesting twists on the typical photo booth, from the funny and popular slow-motion booth to the Instagram-inspired DIY version. The Thermobooth is yet another take on the old classic, and the twist here is that it won’t take your picture until you and the other people in the frame touch.

That’s right, this thing isn’t made to work solo. Designed by Talia Radford of taliaYstudio and digital designer Jonas Bohatsch, the Thermobooth is all about combining human interaction and electronics into a creative photo-taking experience. 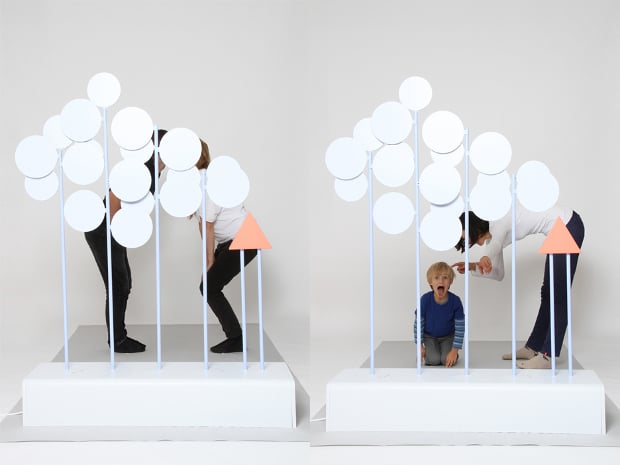 The Thermobooth works by combining two high-tech pieces with one low tech piece. On the high-tech side of things you have OLED mirrors that double as flashes and a “smart carpet” connected to a MaKey MaKey circuit board. On the low-tech side is a thermal printer that spits out the shot instantly in “glorious lo-fi.”

When two or more subjects stand on the “smart carpet” and make skin contact, the circuit is completed and the shutter is released alongside the OLED flashes. The resulting pic is then instantly spit out of a thermal printer. The first prototype of the Thermobooth was originally housed in an IKEA chest of drawers at a party in Vienna, and although Radford admits to Dezeen that it was “really ugly,” she continues on to say that “the guests went quite mad about it.”

When asked why they went with thermal printing, Radford explained that, “thermal printing is quick and dirty in its look and it holds some of the nostalgia of instant analogue photography.”

The Thermobooth is debuting at Vienna Design Week, which started yesterday and runs through October 6th. To see sample shots or get in touch with Radford and Bohatsch about renting out Thermobooth, head over to the project’s website by clicking here.