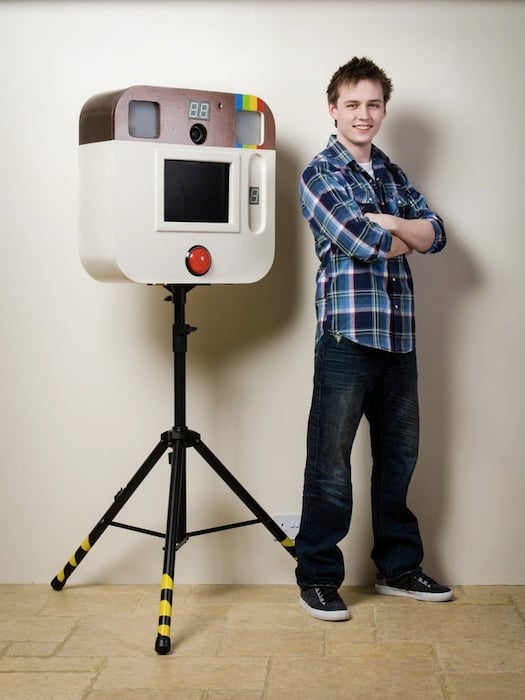 Using just a few pieces of wood, some serious DIY know-how and an Arduino, photographer and Instructables user Alexander Morris built this really cool, Instagram-inspired photo booth as a fun extra for events and parties. Fortunately for us, he uploaded a ton of pictures and instructions so that anybody with a little bit of time and skill can put one together for themselves.

To start out, get yourself a 600mm x 600mm sheet of MDF and cut out holes for a red dome push button, lens and TV monitor (you can also add a frame to the TV monitor cut out for depth). Once you’ve done that, round the edges with a jigsaw so it looks like the Instagram symbol we’ve come to know and love (or loathe). 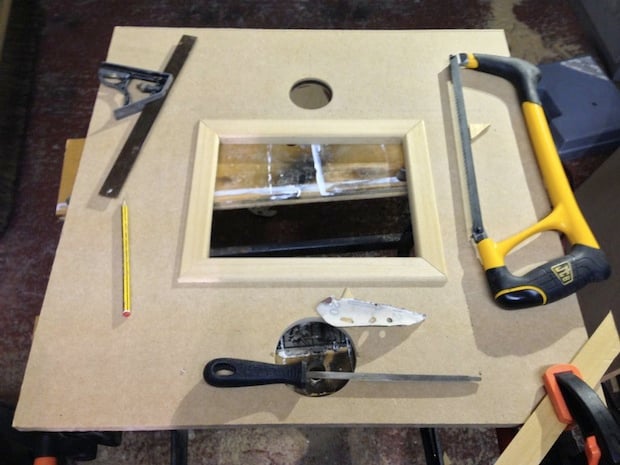 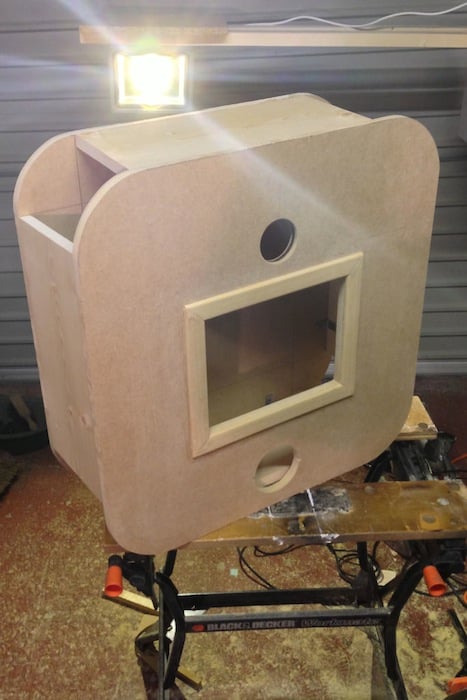 Next, attach the front piece to a similar board with the same dimensions using screws, 90-degree brackets and wood planks cut just shy of where the corners begin to bend. Once you’ve done this, it’s time to build the corners by gluing together short strips of wood into a corner shape, attaching them using screws and 90-degree brackets, and rounding them out with a wood plane and sander. 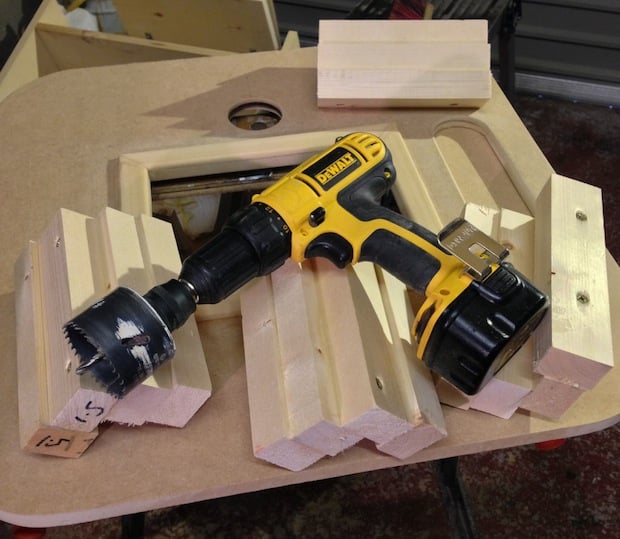 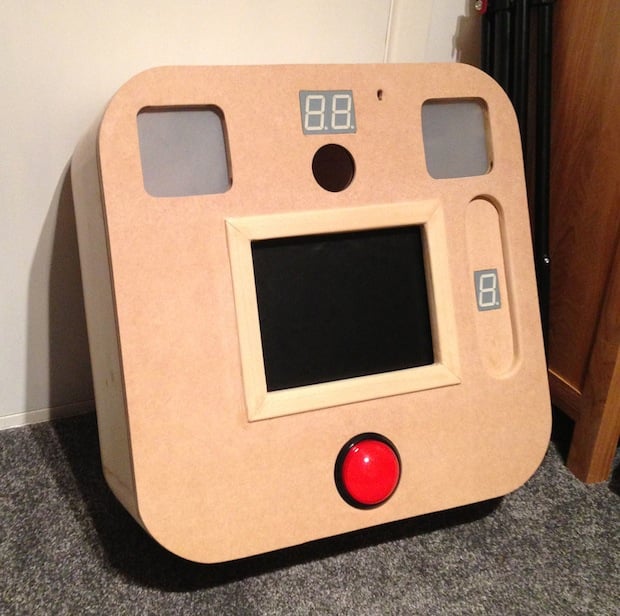 Finally, to complete the housing, you’ll have to cut four more holes. Two to contain three 45mm seven-segment displays (two displays together at the top and one on the right), and one on each side at the top for the flash guns. The flash holes are then covered up with translucent plastic to diffuse the light.

Next come the electronics, and this is where the instructions get a bit vague, so if you need more detail, be sure to head over to Instructables and check out all of the pictures Morris uploaded. 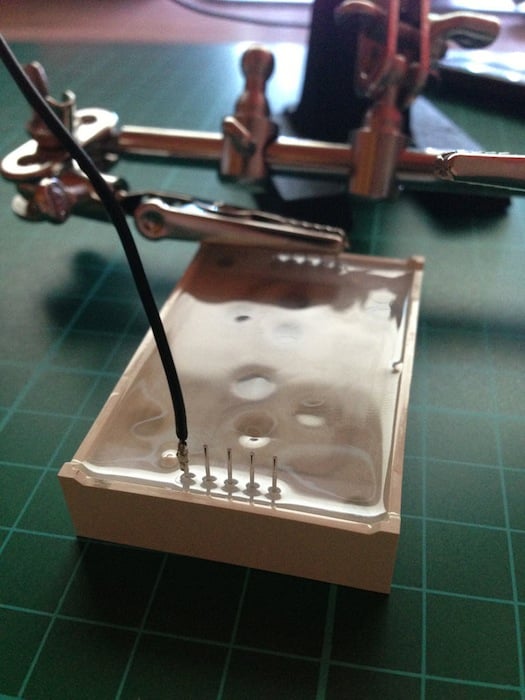 To start, attach wires to each of the seven-segment displays (9 wires per) and cover/bind them together with heat shrink. Then take a printed circuit board (PCB) and attach 28 transistors and 29 resistors using red and black wire. The final product should look like this: 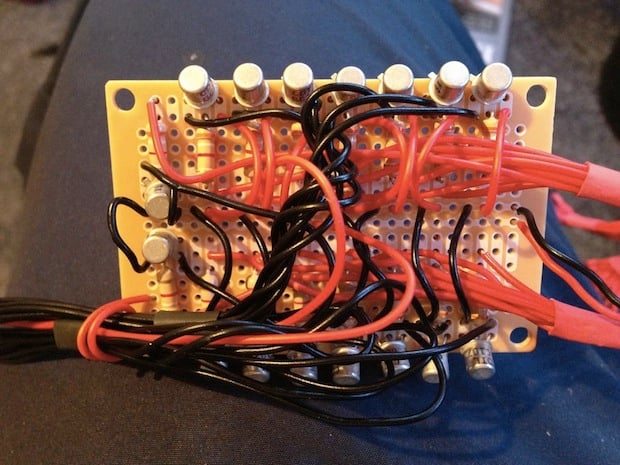 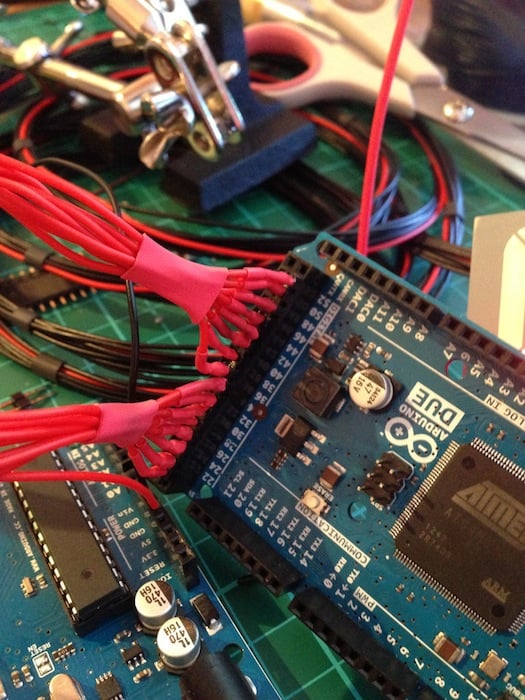 After you’ve set up your PCB, attach the header plugs to each of the seven-segment displays and solder the push button (plus an LED to light it up) in as well. To control the camera, a 2.5mm jack must be soldered in and attached to a transistor; when the transmitter is closed, it will connect the ground of the camera wire to both the autofocus and shutter trigger. 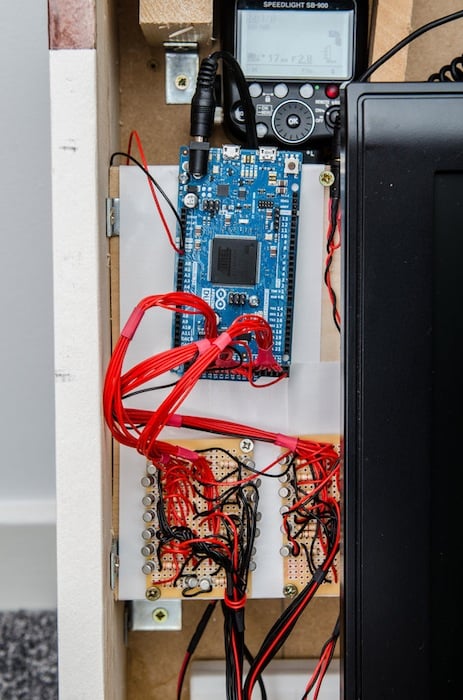 Finally, if you managed to follow all of that, you’ll now have to program the photo booth’s functionality via an Arduino and then mount everything inside the shell you created. In Morris’ case, the Arduino was programmed to take 4 pictures, using the single seven-segment display on the right to show which picture was being taken, and the two at the top to count down from 10 for each photo.

Inside the box, he mounted a Nikon D3200 with two SB-900 flashes set to 1/8 power, with one of them connected to the camera using a TTL cable and both connected via PC sync cables. He then mounted a small TV inside, used a standard power cable threaded through the speaker stand to power it all, and mounted two 60mm 12v fans into the bottom to keep everything cool. 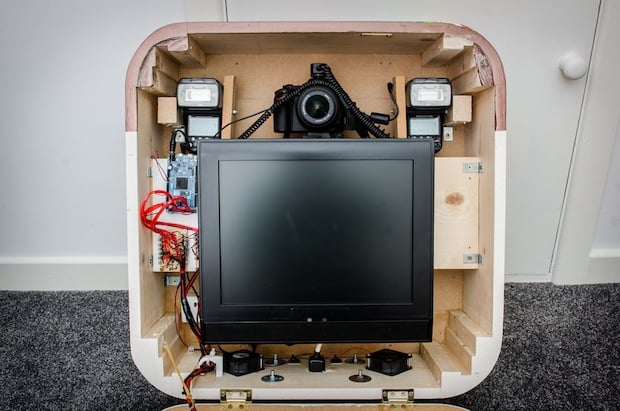 And that’s it, one appropriate paint job later and we have an Instagram photo booth. Obviously it’s not the simplest DIY project ever, but the results speak for themselves. Since we don’t have the time to go into any more detail than we already did, be sure to head over to Instructables for more build photos, sample pics and an in depth step-by-step.

The History of Photoshop as Told by Its Founding Fathers

Strange Photo Project Keeps Daily Tabs on a Vending Machine, Apologizes for It