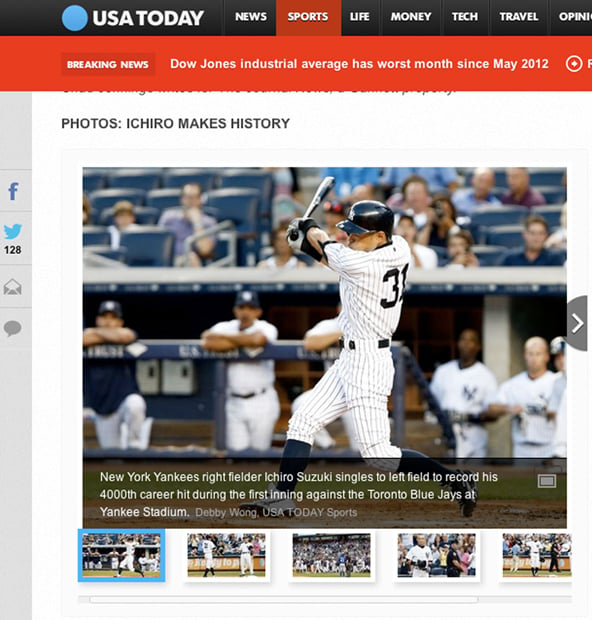 Any professional photographer who’s been working long enough has experienced the humiliation of missing the big shot, so it wasn’t that big a story when two sports photographers missed Ichiro Suzuki’s landmark 4,000th base hit at a recent New York Yankees game.

It’s what happened afterward, when USA Today Sports Images photographer Debby Wong passed off a photo of another Suzuki swing as the iconic moment, that turned the incident into a significant photojournalism ethics fail.

The latter was enough to start a ruckus in the pit, with a Yankees representative eventually intervening and reminding Wong that she was outside her assigned spot.

It also made the miss widespread news, at least in the world of New York sports photographers, so numerous eyebrows were raised when a Wong photo of Suzuki swinging later appeared on the USA Today site with the caption: “New York Yankees right fielder Ichiro Suzuki singles to left field to record his 4,000th career hit…”

Photographers started talking, noticing the batter’s body position in Wong’s photo didn’t match other shots of the moment. The conversation hit a new level of urgency a few days later, when Reuters announced it was dropping all freelance sports photographers in favor of images from USA Today Sports Images, which provides for sports photo for USA Today and other Gannett publications, along with a growing roster of subscribers.

Five days after the game, UTSI issued a kill notice for Wong’s photo, explaining only that it “was not correctly identified.” UTSI President Bruce Odle later confirmed that Wong’s contract with the agency had been terminated.