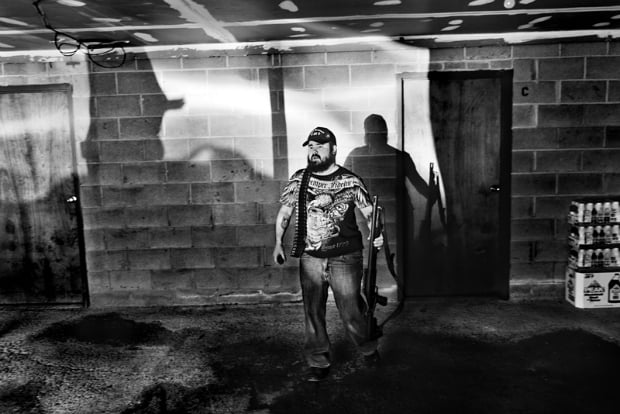 This striking photo, taken by Magnum photographer Paolo Pellegrin, has been making the award rounds recently, sweeping up first and second place trophies for the photog’s mantle. According to the description, the photo portrays a “former Marine Corps sniper,” and is part of a series of photos taken in a rough part of Rochester, NY called “The Crescent.”

Pellegrin’s ethics, however, are now being called into question by a BagNewsNotes article, which points out that the man in the photo, Shane Keller, was neither a sniper nor does he live in The Crescent — he was headed to a shooting range at Pellegrin’s request, as part of a portrait shoot.

The story actually begins early last year, when ten magnum photographers took it upon themselves to document Rochester, NY, the stage upon which was portrayed the history and the decline and fall of the Kodak empire.

Each photographer chose one particular aspect of the city to shoot (e.g. architecture) and then proceeded to capture that aspect in a fashion befitting Magnum photographers. Pellegrin chose the underbelly of Rochester, and enlisted the help of photographer Brett Carlsen to find it.

The majority of this underbelly can be found in the aforementioned Crescent, but after capturing several photos in that area, Pellegrin expressed a desire to focus on the “larger issue” of gun culture. This led them to combat photographer and gun owner Keller’s doorstep.

What began and ended as a portrait shoot — in Keller’s apartment and at a shooting range, respectively — entered into what Keller is calling photographic “a gray area” somewhere in between, when they were getting ready to head to the shooting range. Here is that part of the story, from both Keller and Pellegrin’s perspectives:

He wanted us to fire some of the firearms at a shooting range. One of the first things I thought was that’s strange, asking us to do something. I’m a student, he’s Magnum. I not going to question him.

When he saw what it looked like in the garage, he wanted to be able to shoot more portraits of me downstairs. I agreed, and we talked about which firearm he wanted me to hold. The shotgun was the one he wanted. I had shotgun shells I could put over my shoulder.

I spoke with one of my friends this morning who was also a combat photographer and Iraq veteran. He looked at it and didn’t see it as a portrait. He sees like a ride-along. It doesn’t look like a portrait. That’s where it turns into this gray area.

I took formal portraits in the house, then we’d go to this shooting place, so I took some more pictures downstairs, in what is a garage area. Then, things start to blend, so it’s not a formal look-at-me, I’m-taking-your-picture kind of portrait. We’re in the same space, I’ve been accepted, I’m there, so I’m taking pictures. Which is how that picture was taken. What I have to say is that I stand by the pictures.

The long and short of it is that Keller feels the photo is a misrepresentation, in large part due to the fact that it was printed alongside a description taken from an old New York Times article (which Pellegrin maintains was mistakenly published by an assistant) and very little actual information about the subject or location. The BagNewsNotes article calls Pellegrin’s ethics into question because they see this as an attempt to make reality more dramatic.

For his part, Pellegrin maintains that, though he made a mistake by not identifying the subject properly, he had seen many people over the course of those weeks in Rochester. Additionally, this project was never about The Crescent per se, but the underbelly of Rochester as a whole.

In a phone interview with The Times, he called the entire situation “ridiculous,” and marveled at the fact that BagNewsNotes would neglect to collect his side of the story (an ethical faux pas), for an article in which they question his ethics.

When Reality Isn’t Dramatic Enough: Misrepresentation in a World Press and Picture of the Year Winning Photo [BagNewsNotes via NY Time Lens Blog]