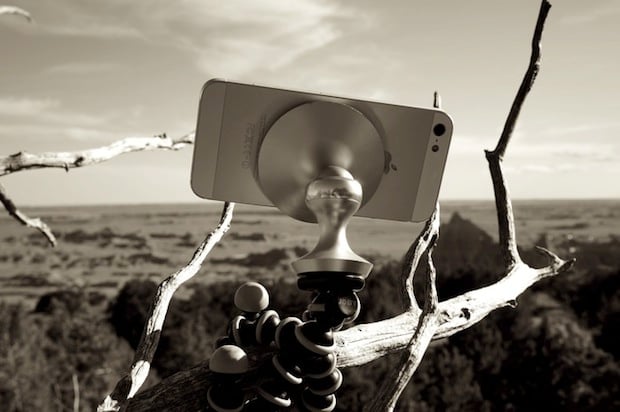 If you like using your smartphone to do any kind of photography or videography, a great mount can go a long way in making your life easier. eleMount is just that, except that it offers so much more. Eye-catching and incredibly practical all at the same time, the little flat surface and tripod mount has taken the Internet by storm.

The design is extremely simple but could come in very handy in many a photographic situation. Made up of two anodized aluminum flat sections connected in the middle by a ball and socket mount, there are no clamps, locks or suction cups to speak of. 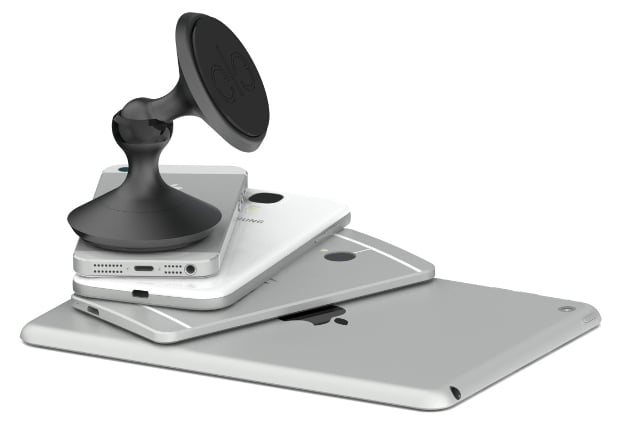 To attach your smartphone (or tablet for that matter) to the mount, you simply press it onto the special polyurethane “elePad” on one surface, and then attach the other flat surface to… well… wherever. As long as it’s flat and clean, the elePad will attach securely.

When it comes time to remove your device, simply pull it off — because of the special material used there should be no residue left on your phone.

But what about tripods? you ask. The eleMount has you covered there as well. One of the flat sections unscrews to reveal a tripod screw mount so you can attach you smartphone via eleMount to any tripod or mounting plate you might have lying around.

It’s simple, useful and beautifully designed, which as you might expect has translated into “popular” as well. The eleMount launched a Kickstarter campaign in August, hoping for $10,000 to get production off the ground. As of this writing, the campaign has 17 days to go and almost $124,000 in the bank.

You can learn a lot more about the eleMount by heading over to that Kickstarter page or visiting the ele website. The system comes in two models: the standard eleMount we’ve been talking about, and the eleMount mini, which eschews one of the sticky pads, leaving you with only a tripod screw mount on one side.

If you’re already convinced, just head over to that first link and drop your pledge. The early bird specials are gone but you can get a black or silver standard eleMount for $70 (will retail for $80), or an eleMount mini for $60 (will retail for $70).

Please Draw Me a Wall: Creative Photos of People Interacting with Graffiti