It wouldn’t be the weekend without some interesting (and maybe a little silly) DIY project for the tinkerers out there. Last weekend it was turning an old film canister into an LED flashlight; this week we give you: how to turn an old SLR and lens into a DIY peephole for your apartment.

The idea comes from Jared Polin of Fro Knows Photo, who had been receiving questions online about the SLR attached to his door. Well, as it turns out, it’s a DIY peephole that he had installed some time ago.

Installing one yourself seems fairly simple. All you need is an old SLRs you no longer use and wish to repurpose, a cheap lens, some 2 1/2-inch PVC, and the ability to drill through your apartment door without any unwanted consequences. 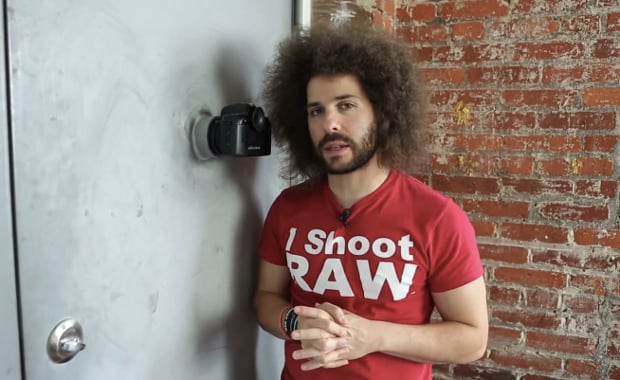 From there on you can probably figure out how putting it all together works, the only word of caution Polin offers is to make sure that the lens you get is long enough to span the door but not so long that it sticks out awkwardly on the other side.

Also, if you want people to keep their hands off your lens, you might want to augment his design by adding a plexiglass cover or something on the outside … apparently people tend to leave fingerprints on Polin’s lens.

Check out the video at the top to see the peephole in action, and if you do install (or already have installed) something like this at home, drop us a photo in the comments. Remember, this is the Internet, which means “pics or it didn’t happen.”

Nikon May Have a ‘Serious’ Underwater Camera in the Works