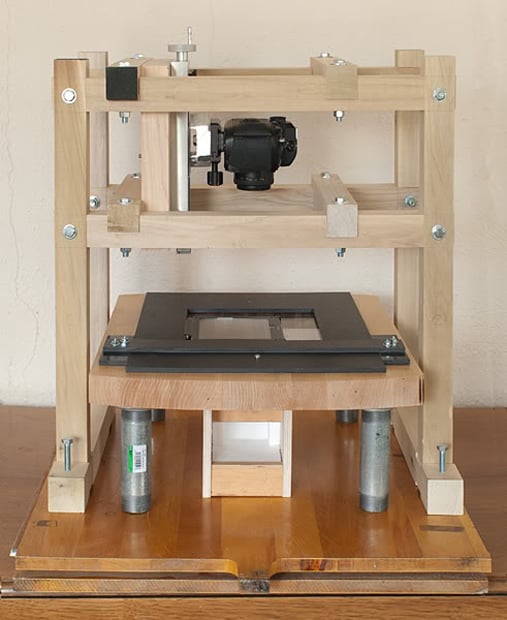 Consumer film scanners don’t provide enough detail, and professional models require too much money and pampering. What’s a dedicated film nerd to do? For Peter De Smidt, the answer was to build his own high-res scanner using the Nikon D600 and 50mm Micro lens he already had on hand, a bit of lumber and a lot of patience.

The basic idea is that a DSLR can capture a super-detailed scan of a negative or slide if it takes the sit-and-stitch route, capturing the image one little piece at a time and later stitching the results together to produce a final composite. De Smidt’s basic rig consisted of a backlit holder for the film and a sliding piece to hold the camera above it.

The first iteration worked well enough, but De Smidt acknowledges in his project description that it was “a little tedious” to precisely position the camera for each of the 25 captures necessary to cover a 6×7-centimeter negative.

Taking his inspiration from computer-controlled machining tools, De Smidt modified his first build by wiring an Arduino board to a couple of Easy Stepper motors and programming the setup with homebrew software that allows the rig to automatically do a piece-by-piece scan of any negative up to 8×10 inches.

De Smidt reports that there are plenty of finishing touches to work on, such as sealing off the light source for the film holder, but he’s pleased with his progress so far. At this point, he can get a clear 22×28-inch print at 720dpi from a 4×5 negative, which he points out is “better than using an Epson V750, one of the top consumer level flatbed scanners.”