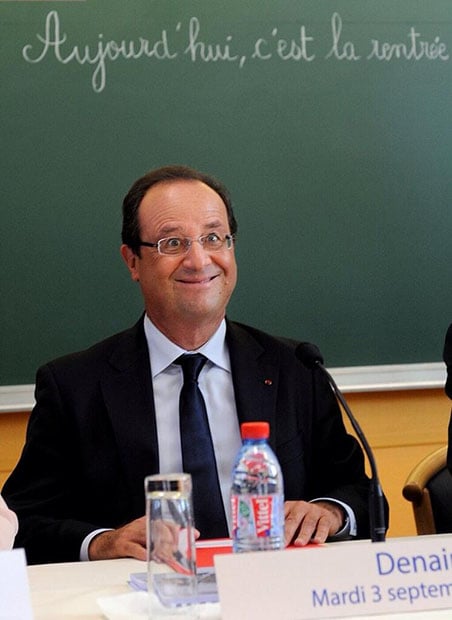 Agence France Presse is drawing fire from other journalists for withdrawing what one rival described as a “village idiot photo” of French President Francois Hollande.

AFP originally posted the image — which shows Hollande posing in a schoolroom with a big, goofy grin on his face — on its website Tuesday for clients to download. Hollande, who was participating in a photo opp to mark the beginning of the French school year, was reportedly making these faces at students to get them to laugh.

AFP apparently thought the image unbefitting the dignity of the office, however, and soon issued a “mandatory kill notice” to clients:

Due to an editorial decision this photo has been withdrawn. Please remove from all your systems. We are sorry for any inconvenience and thank you for your cooperation.

By then it was too late, though, as the photo had already made the social media rounds, prompting all manner of laughter and ridicule.

To make matters worse, rival French journalists quickly accused AFP — which receives half its funding from the French government — of censorship and knuckling under to pressure from on high.

AFP News Director Philippe Massonnet, however, explained that the withdrawal was a simple news judgement.

“It was decided to kill the photo as we considered in retrospect that it provided nothing in news terms,” he told the Nouvel Observateur website, after which he added a thinly-veiled dig at online outlets: “Unlike certain media, when we make a mistake, we correct it.”

Thief Caught on Video Stealing $6,000 of Camera Equipment During a Wedding