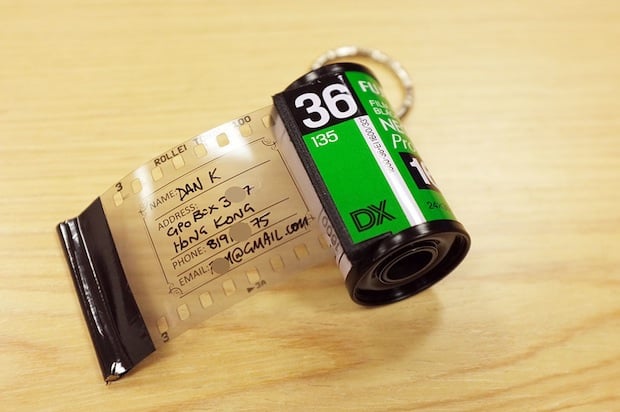 I’ve seen lots of used film canisters repurposed as dangling bag accessories for sale in trendy parts of Hong Kong. The idea is to drill or burn a small hole in the top of the plastic spool and fit a keychain to that. I figured it would be a lot more useful to use the can to give a return contact address in case the bag is lost and found. What better way could there be than to use film?

How to make it: As I bulk load my own film, I cut off exposed film leaving about 1/2-inch of film still sticking out of the spool. Most labs do this too, so you should be able to get these for free by the armload at most friendly high-street labs that do their own processing. This tab is easy to tape the end of the new film to. You don’t have to pry the can apart at all. It may be a good idea to write “Owner’s contact details in the can” in the developing notes box on the can. 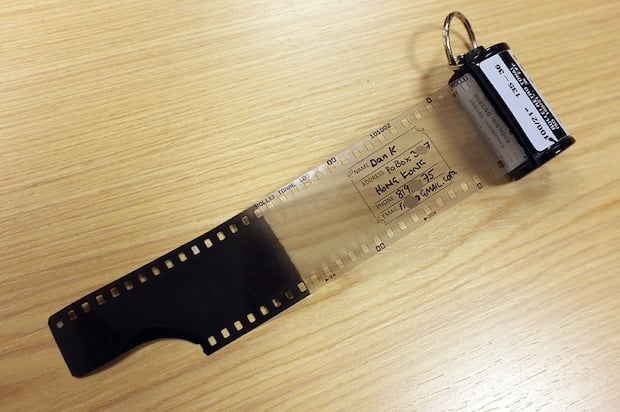 Show your personality and style! You can use your favorite brand of film, but if you’re going to go really hard-core, pick something rare and exciting like discontinued Fujifilm Super Presto 1600, or Kodak P3200. Why not join the can to the key ring with an authentic camera strap split ring attachment if you have one spare?

How to prevent the film leader disappearing into the can: There’s no point to this if the finder can’t find your address! I taped a bit of wood (half a toothpick will do) to the end of the roll with some high-quality Nitto tape. In the example above, I taped the wood to the back of the leader. It’s not visible behind the darkened portion of the film.

How to Expose: In some versions shown here, I included a printed name and address template. This simply involved designing and displaying a template on the computer and photographing that. By inverting black and white, I could print black on clear using black and white film. 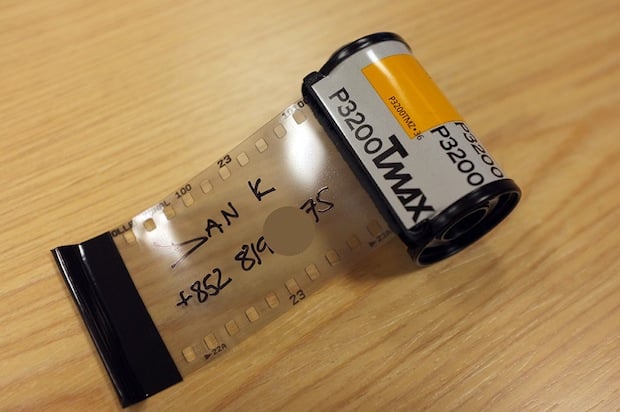 You can just use the blank first 2-3 frames (numbers 00 and 0) of a normal roll of film. This is thrifty and saves effort. Let rip with your creativity! You can expose a personal logo or a photo (or even the best 36 photos of your portfolio) onto the film reel. Remember, by displaying them in negative on your computer, they will come out like slides.

Film Base: I chose Rollei Retro 100 Tonal film stock because it has a clear base and string blacks. Just don’t use color negative or high-speed black and white as they have a dark base. Slide film works too, but it has a black base and (obviously) you don’t need to invert the image when you expose it.

Caution: If you do include a long roll of film, spray the emulsion side with clear lacquer, as the gelatin coating will absorb water, swell and stick together if it gets damp.

Have fun and show us your unique version!

About the author: Dan K is a photography enthusiast based in Hong Kong. He’s passionate about collecting film compact cameras. You can find him on Tumblr and on Twitter. This article originally appeared here.