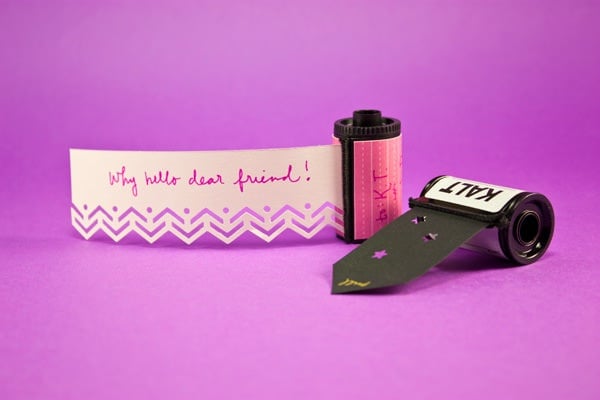 If you’ve got spent, empty film cassettes lying around collecting dust, Photojojo has a crafty idea for the mindful re-user: make them into rolled invitation or stationery holders.

It’s quite simple: cut and decorate 1.375″ x 11″ strip of paper, pop the top off the film cassette (you can use a bottle opener) and tape the inside end of the strip to the film spool. Wind the paper into the cassette and leave a tab for the recipient to unfurl the message.

The project was inspired by these nifty film roll invitations by wedding photograhers Trevor and Larissa that we featured a few years ago.

After you’re done reusing film cassettes, sure to check out some other DIY ideas we’ve posted on repurposing film canisters: Christmas ornaments and lights, glow sticks, salt and pepper shakers and a room divider.

Reuters to Use Robotic DSLR Cameras for Olympic Coverage

Will High-Resolution Displays Convert Smartphone Shooters Back to Cameras?