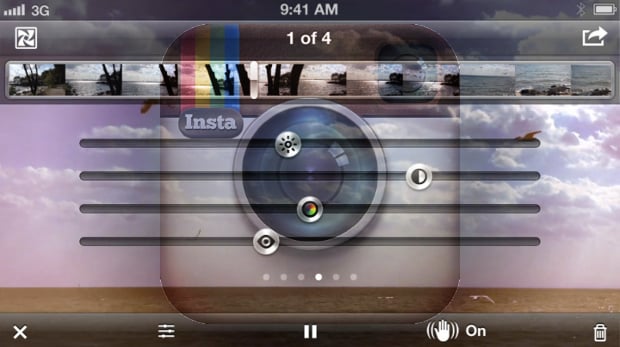 It wasn’t so long ago that Instagram was in the business of being bought, but now that the app has the power of Facebook behind it, as Bob Dylan would say: The Times They Are a-Changin’. In addition to the recent update to the company’s brand guidelines that banned the use of “Insta” and “Gram” by connected apps (among other things), the company just made an acquisition of its own.

In a move clearly meant to help continue improving Instagram video, the company purchased both the team and technology behind the video app Luma. Before it was bought, Luma was a shooting, sharing and stabilization app that prided itself on its cinematic stabilization capabilities:

According to TechCrunch, Facebook has confirmed that this is indeed Instagram’s first acquisition, and rumor has it the technology behind Luma’s stabilization is already at work in the latest version of the Instagram app.

As you might imagine, the acquisition means the end of Luma. The app has already been pulled off the app store, and those who already have it will only continue receiving updates and support through the end of this year. Visitors to the Luma website are now greeted by this message: 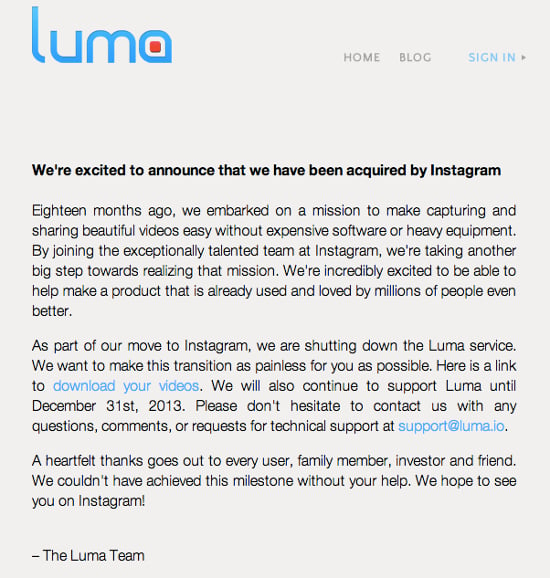 In addition to stabilization capabilities, Instagram stands to gain a few other cool features from Luma. For one, the Luma app allowed users to apply filters live, while shooting, and remove or change them after if they wanted. Luma also offered some post-processing features, such as the ability to change contrast, brightness, saturation and exposure.

As Instagram continues to differentiate itself from Twitter’s Vine — mostly by adding features — it would seem likely that all of these capabilities should eventually make their way into an update. Who knows, maybe that’s what’s awaiting users in the future Instagram version 5.0.