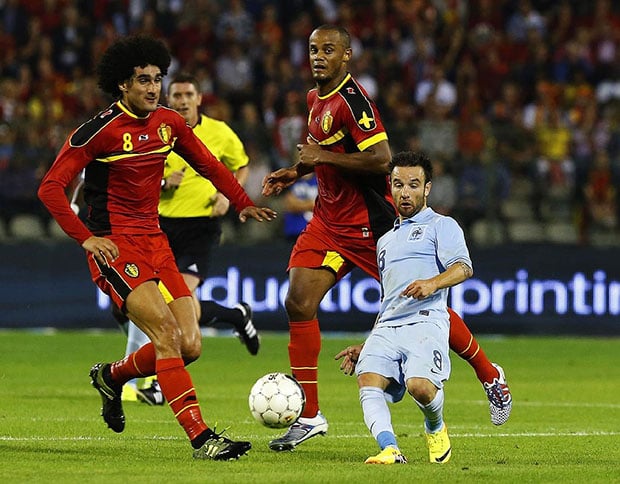 Reuters photographer Yves Herman captured this peculiar photograph at a match between the Belgian and French national soccer teams yesterday. The photograph has attracted the Internet’s attention due to the fact that it makes 28-year-old soccer player Mathieu Valbuena look like a child playing among men.

It’s a pretty great example of perspective compression. What makes it unusual is that it’s mainstream media and I figure shots like this would never make it past the cutting room.

In addition to look caused by the telephoto lens and the position of the photographer, the effect is also due to the size of the players involved — Valbuena is 5’6” while the other two players (Vincent Kompany and Marouane Fellaini) are 6’3” and 6’5” (respectively) — and the fact that Valbuena is falling down backwards as he’s making the pass.

The result is what appears to be a 4-foot-tall player on the blue team chasing after the ball.

Sports photographers and editors beware: watch out for strange optical illusions in your photographs, lest the images attract the Internet’s attention for reasons unrelated to the news at hand.

New Algorithm Can Pick Out Photo Fakes by Looking at Shadows