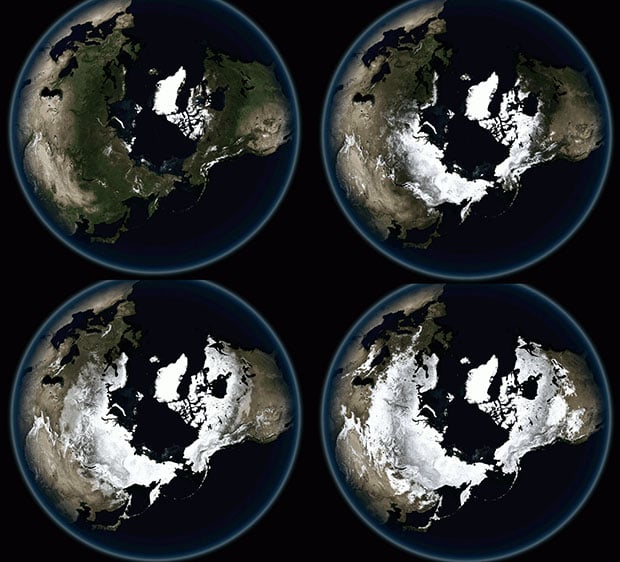 Want to see how our planet “breathes”? Data visualization guru and cartographer John Nelson recently downloaded twelve cloud-free satellite photograph mosaics of Earth showing what our planet looks like in each month of the year. He then combined them into animated GIFs that show the steady pulse of seasons.

This first one shows what the planet looks like over the North Pole. We see how far the ice extends during some months of the year, and how far it recedes during others:

This one shows two additional views: a 2D version of Earth as a whole, and what the South Pole equivalent looks like:

Nelson says that after he stitched together what could be an “impersonal snapshot” of our entire planet, he suddenly found that he was looking at “a thing with a heartbeat.” “To me it looks like breathing,” he writes.

The photos used in the timelapse GIFs were grabbed from a NASA website called “Blue Marble Next Generation.” It’s a database showing Earth’s surface at a global scale with an extremely high resolution (500m/pixel) for each month of 2004.

You can find larger versions of these animated GIFs (up to 8.9 megabytes) over on the IDV Solutions UXBlog where Nelson published this work.

P.S. You can find a larger version of one of the views in the second GIF here. It’s something we shared back in 2011.