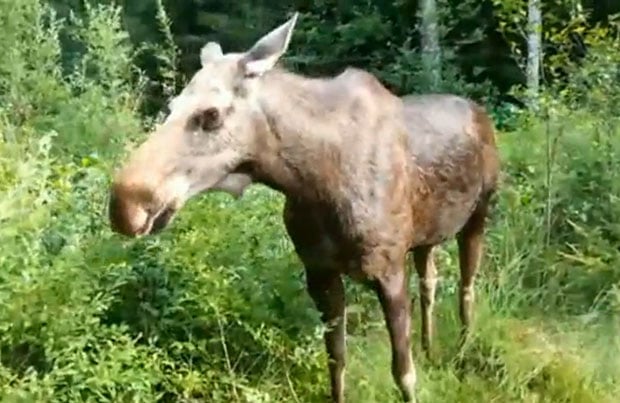 Norwegian photographer Arvid Strømnes learned a lesson earlier this week about why you shouldn’t get too close to wild animals while trying to capture them on camera.

He was biking through a forested area near Fredrikstad, Norway this past Tuesday when he came upon a moose and its calf feeding on plants and leaves.

Rather than keep his distance and move on, Strømnes decided to pull out his camera and capture some footage of the animals up close. He managed to capture nearly four minutes of video with only a minor scare when the moose did a small charge at him as an act of intimidation:

Then, Strømnes captured himself getting charged again… this time for real. This second shot clip cuts out just as the photographer is being knocked to the ground:

Norwegian news site The Local reports that the territorial moose kicked him to the ground, and then pummeled him again when he tried to get on his feet. Miraculously, Strømnes escaped the incident with only a bruise.

“It was not that smart, but I got a real adrenaline rush,” Strømnes tells the Norwegian newspaper Fredriksstad Blad. “I understand those who will say that this was irresponsible.”

This story is strangely similar to another one we shared last month, in which photographer Dan Milner was headbutted in the lens after getting too close to a deer in the Scottish Highlands.

So what’s a safe distance between you and a wild animal? The US National Park Service commonly recommends putting at least 100 yards between you and predatory animals such as bears and wolves, and 25 yards when it comes to other wildlife such as nesting birds.

(via Fredriksstad Blad via The Local via HuffPo)