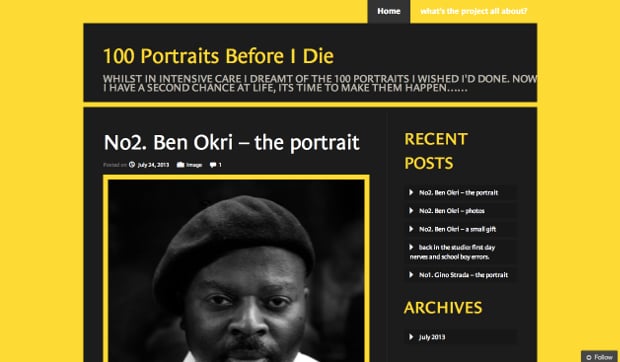 In 2011, photographer Giles Duley stepped on a land mine while working in Afghanistan. Originally a celebrity portrait photographer who had been turned off to celebrity culture by the people he was photographing, he had always hoped to return to portraiture.

That’s why, during his 46-day fight for his life in intensive care, it was to portraiture that his mind turned, and a project took shape.

The days in intensive care consisted of a horrific mix of “morphine, exhaustion and fear,” but Duley decided that if he made it out of there alive, he would take the 100 portraits he had to shoot before he died. Slowly, his list took shape. Two years, 30 operations and a lot of rehabilitation later, he’s ready to start.

Although he’s lost an arm and part of both legs, he and his passion are still very much alive. Here’s a short behind the scenes of his shoot with Italian war surgeon and humanitarian Gino Strada, the first on his list of 100:

He has only just embarked on this journey, launching a website so you can follow along and support him as he tries to cross off the names on his own personal photographic bucket list. Two portraits in, he doesn’t know who will say yes and who will say no, but he understands that this project is about the journey and not the destination.

“I hope to develop my abilities in portraiture, to explore my own cultural identity and broaden my understanding of photography,” writes Duley on his website. “Most importantly to fully regain my life and identity post accident, with more than a little fun along the way!”

To read all about the challenges he’s faced returning to the studio — including a shift from film to digital, and the realization that even the light stands have changed so much he doesn’t know how to set one up — keep up with him as he crosses off numbers 3 through 100, and maybe offer some support and encouragement along the way, head over 100 Portraits Before I Die by clicking here.

Sigma Teaser Website Gets the Internet Buzzing with Speculation