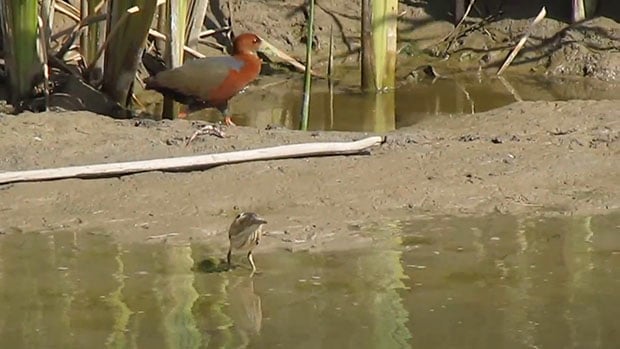 Camera-toting birders are flocking to a remote area of New Mexico to capitalize on what’s being described as “the best photobomb in history.” At least for people who are really into birds.

Matt Daw, a Bureau of Reclamation researcher, was in the Bosque del Apache National Wildlife Refuge near Socorro, N.M., a few weeks ago, shooting video of the common least bittern, when a colorful rufous-necked wood rail wandered into the frame. Seeing as that particular bird has never been seen in the United States before, he got a little excited.

“I dropped my camera , I was so surprised,” Daw said in video interview for the American Birding Association.

“The bittern literally got photobombed,” refuge manager Aaron Mize told the Associated Press. “This thing came running out of the cattails, and the camera kind of shakes. It’s really kind of funny…In the birding world, they’re saying it’s the best photobomb in history.”

Since the video and discovery went public, the wildlife refuge has been besieged with birders looking to seize a rare opportunity to add a species to their life lists. Hundreds of images of the wayward rail have been posted on Flickr, and the bird is getting celebrity treatment on the refuge’s Facebook page.