Unfortunately, the news that a particular type of film is being discontinued is anything but surprising these days. And even though we haven’t had reason to report any such news for a little while, we can once again cue “Another One Bites the Dust” by Queen, this time in honor of Fujifilm’s Neopan 400 B&W film and Provia 400X slide film.

The news was first reported by Los Angeles, CA-based Freestyle Photographic Supplies when they posted this bulletin on their Facebook page. The marketing update officially confirms that we’ve seen the last of the Provia 400X and Neopan 400 films.

“We know that any discontinuation of a well-loved and long established product can be difficult to adjust to for both the retailers and the end-user,” says the bulletin. “However, in order to gain efficiencies and proper utilization of line capacity, it is necessary to review volumes and make appropriate decisions moving forward.” 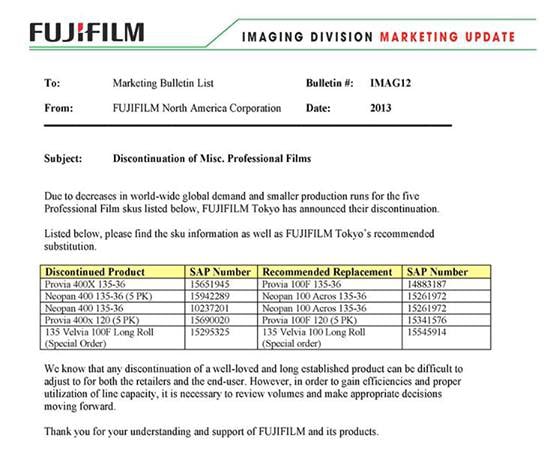 For those of you who shoot exclusively Fujifilm, that leaves you with three slide film options and only one black-and-white option, all of them slower: Provia 100F, Velvia 100, Velvia 50 and Neopan 100, respectively.

For now, you should still be able to find stock of both the Provia 400X and Neopan 400 — some forum users who saw this coming are already boasting about their secret stockpiles — but once the stock runs out, Fujifilm is suggesting your switch to Provia 100F and Neopan 100 respectively … not that you have much in way of choices.

Video: Photo Restoration and Colorization Demonstrated Through a Time-Lapse