Lytro may have made a splash when the company first burst onto the scene with its ‘snap now, focus later’ technology, but the competition has been growing steadily ever since. In addition to companies like Pelican gunning at the light-field market, a new SLR add-on created by researchers from Saarland University in Germany promises to bring Lytro-style refusing and much more to almost any camera.

The add-on has been dubbed the KaleidoCamera, and it was invented by Alkhazur Manakov and his colleagues. It mounts between your standard DSLR and standard lens, and then performs all sorts of optical magic by messing with the light entering the camera.

Depending on how they choose to modify the add-on (removing and adding special filters and glass), their invention can bring everything from single-shot HDR, to polarization, to Lytro-like refocusing and more to any camera it’s attached to.

The technology behind how they make all of this possible pretty much centers around splitting the incoming light beam using different lenses or diffraction filters. According to NewScientist, the light that enters the KaleidoCamera is split into nine beams depending on the angle each beam come in at.

Those beams are then modified in one way or another (depending on the KaleidoCamera’s configuration) and projected onto the sensor in a grid using a set of mirrors. The photographer can then use software to re-combine them in post however he or she likes.

For example, the image at the bottom left of the photo below is what results when using the add-on to create Lytro-style images. That image can then be re-combined in post to generate something focused on the foreground, background, or anywhere in-between. 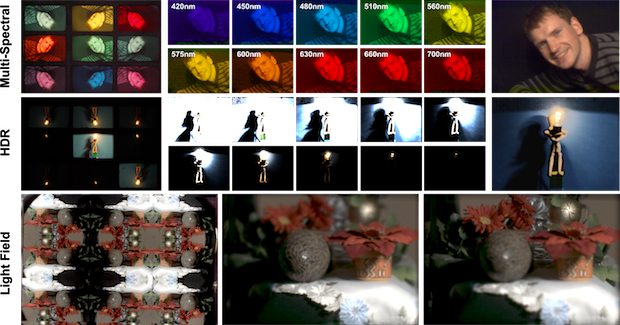 Of course, this is just one example. The video at the top goes over all of the potential uses of the camera, which include generating macro-style depth of field without a macro lens, eliminating the need to white-balance, and more. If you want to learn all about the add-on’s capabilities and the complex tech behind it, check out the full paper by clicking here.

For now, the add-on has been kept bulky to facilitate experimentation with different filters and glass, but over time, the researchers are confident that they will be able to shrink it down to fit almost any camera, including (potentially) smartphone cams.

The researchers will be showing off their invention all next week at the SIGGRAPH conference in Anaheim, CA.

These Vintage Photos of Coastlines Were Created Using a Fishtank