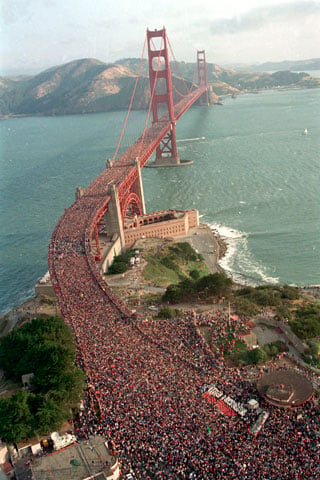 Hundreds of thousands of protesters angry over the verdict in the George Zimmerman/Trayvon Martin trial swarmed San Francisco streets this weekend in numbers huge enough to shut down the Golden Gate Bridge.

At least that’s what happened in the world of social media, where a photo (above) of a pedestrian-filled 1987 celebration of the iconic bridge’s 50th anniversary circulated on Twitter, Instagram, Facebook and their ilk posing as evidence of mass San Francisco reaction to Zimmerman’s acquittal.

Here are some sample Tweets found over on Twitter:

In reality, a couple hundred San Franciscans people did the usual “no justice” thing in Mission District. It was Oakland where things got hot enough to shut down a freeway.

In true Twitter fashion, even the debunkers who piled on after the photo had made it’s fraudulent rounds got it wrong, claiming the image was from the 75th anniversary celebration for the bridge in 2012. Nobody got to walk on the roadway then, because the 1987 crowds were so extreme that their weight temporarily flattened the roadway. Engineers didn’t like that and vowed to never let it happen again.