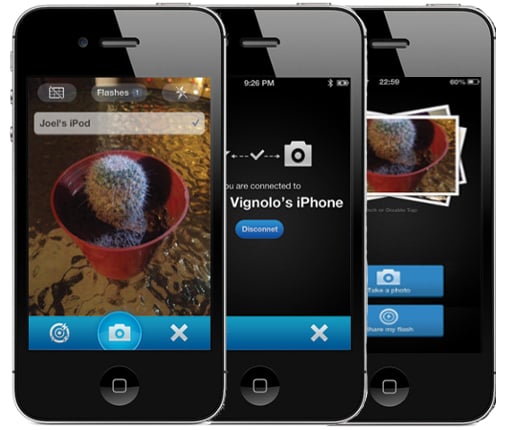 The flash built into your iOS device isn’t anything to write home about. If you want something more capable, the general approach is to attach something more powerful, like a Kick Light or Manfrotto’s KLYP flash. But there is another way to do it.

What if you could slave other phone’s flashes? Something like it turned up in an Apple patent a while back, but a developer beat Apple to the punch by designing a camera app that does just that.

The app is called External Flash, and it has two uses. You can either take a photo, using up to 16 other iDevice flashes as slaves; or you can volunteer your device up and share your flash. The folks over on AddictiveTips got their hands on it and put together this demo to show you how it works:

It’s a nifty idea that could come in handy in low-light situations, or for group shots where everyone’s phone can be used to create a more powerful single flash coming from a different angle. You could even create a little DIY Light Box like this one and use iDevices from different angles to get more professional-looking product shots for eBay or Craigslist.

There are plenty of uses for the idea, and we’re sure you’ll think of some that haven’t crossed our mind. But before you do that, head over to the iTunes App Store to pick up your free copy of the app. It was released almost three months ago and is only free on an introductory basis, so grab yours before they attach a real price tag.

This is a DIY Camera Obscura You Wear on Your Head