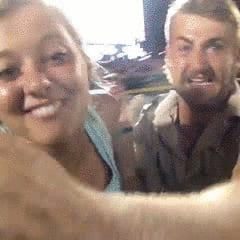 The fine for rushing the field at the College World Series final is $1,500, but who can put a price on becoming an overnight viral Vine sensation? Well, whatever price Kayleigh, Emily, and Torrie Hill assigned to viral fame, it was more than $1,500, because they rushed the field and captured some expensive selfie footage in the process.

The whole thing went down in Omaha, Nebraska at the final of the CWS between UCLA and Mississippi State (an 8-0 blowout in favor of UCLA). Near the end of the game, after tweeting their desires to the world via Kayleigh’s Twitter account, the three girls went for it.

All of them got caught in the end (tackled may be the correct word), but Kayleigh took the prank one step further by using Vine to capture and post about the experience:

As you might expect, many of Kayleigh’s tweets and the Vine video were erased after the incident, but this is the Internet, and nothing that is ever posted really goes away. In addition to the above .gif and screenshots people have captured from it, several other Twitter users also captured the experience in their own photos:

Nothing happens in Nebraska huh? pic.twitter.com/Yoqthz0suT

@mothafukaimhILL I don't know if you've seen this or not but I just saw it on a random Instagram hahaha pic.twitter.com/1pxsIbqsyl

3 girls who apparently just ran on the field being escorted from the park pic.twitter.com/4aFU7ZXCsz

It was a foolish thing to do, and certainly something we neither condone nor suggest that you attempt, but there’s no doubt the gambit has given the sisters (and in particular Kayleigh, who thought to record it) their “15 minutes of fame” so to speak.

Goes to show that TV cameras ignoring streakers and crazed fans running onto the field—a common practice so that the networks aren’t encouraging this behavior by giving the offenders the attention they crave—may not be enough anymore now that everyone has a camera and a willing several-million viewer sized audience at their social network disposal.

Pentax Ricoh to Drop the ‘Pentax’ from Its Name, Will be Just ‘Ricoh’ from Now On