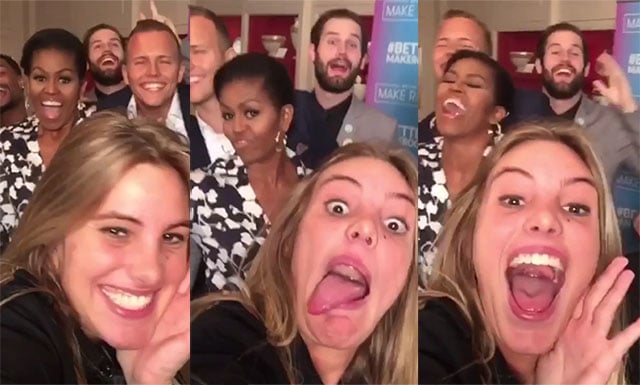 “This campaign will leverage traditional and new media platforms to celebrate student stories in the same way that we often celebrate celebrities and athletes,” the White House writes in a press release. “With partners in the business, philanthropic, media, and education realm, this campaign will stretch across the country to inspire students and give them the tools they need to reach higher for college.”

It appears that “new media” includes both Vine and selfies. Among the people invited to the White House today was Lele Pons, a Vine superstar with over 9 million followers and 7 billion views. Pons posted this 6-second video in which Obama joins a group of Internet celebrities for a series of silly selfies (the caption is “When squad goals become real”):

The Vine is already attracting a great deal of attention for the new campaign. It was viewed more than 1 million times in less than an hour on Vine, and it was quickly shared by the official Vine account on Twitter as well.

“The idea here is we want to make sure this is going to resonate with young people,” says Eric Waldo, executive director of Michelle Obama’s Reach Higher initiative.

Thanks for Sam Cornwell of Phogotraphy for sending in this tip.