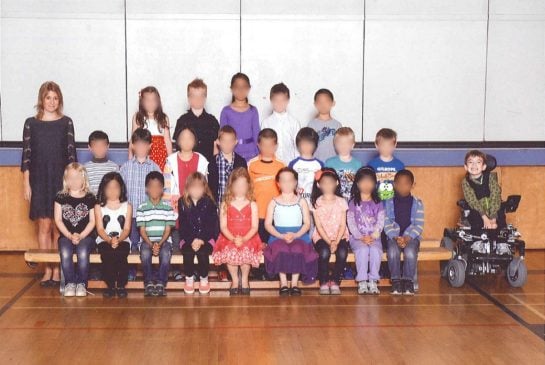 School portraits don’t often make the news for causing controversy, but that’s exactly what the class photo above has been doing over in New Westminster, British Columbia, Canada. Parents of the boy seen on the right side of the frame were unhappy after receiving the photo and finding that their son had been set apart from his classmates and teacher due to the fact that he uses a wheelchair.

The boy is 7-year-old Miles Ambridge, who was diagnosed with spinal muscular atrophy (a genetic muscle wasting disease) when he was 13 months old.

Miles’ mother Anne Belanger tells the Toronto Star that she was “heartbroken” when she saw the 2nd grade class photo:

I couldn’t comprehend how the photographer could look through the lens and think that this was good composition… this just boggled the mind. […] Being picked on and being set aside is horrendous and this was what was happening.

Miles’ father Don is now demanding that the school ask the photography company to reshoot the class photograph. The firm has since offered to remake the image, but so far the school has not responded to the media’s request for comment.

Anne Belanger believes the photographer simply wasn’t thinking when he posed the students and snapped the shot. “This was not a malicious act, I don’t think it was done on purpose. I just don’t think there was any rational thinking behind it,” she tells the Toronto Star.

The parents say they’ve decided not to show the photograph to Miles in order to not hurt his feelings.

Here’s the photographers’ takeaway from this story: when shooting a group photograph, make sure you pose your subjects in a fair and “rational” way.

Update on 6/19/13: The photograph has been remade, and the parents are calling the new image “gorgeous”: 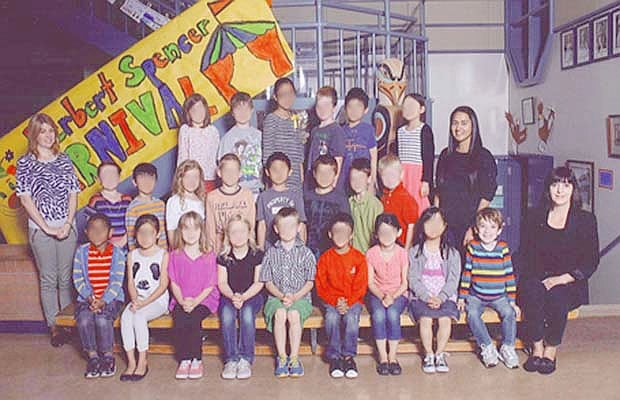 Miles is the boy in the striped shirt in the first row on the far right.

Photojournalist Bill Eppridge Discusses the Importance of the Still Image