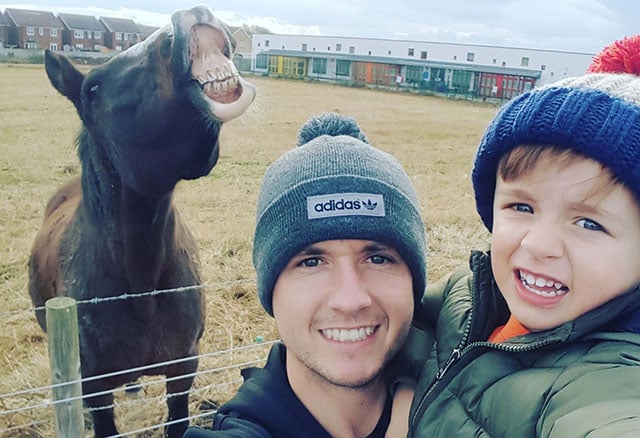 A 3-year-old boy named Jacob Bellis recently won £2,000 in a photo contest after taking a selfie with his father, David, and a grinning horse in the background. Now the owner of the horse is demanding a share of the money for the role his horse’s photobomb played in the photo.

The Guardian reports that after Thomson Holidays announced the boy as the winner of their recent “Made Me Smile” competition, the travel company was contacted by the horse’s owner, Nicola Mitchell.

She argued that the boy and his father should have asked for permission before including her horse in their snapshot, and that her family trained the horse to stick out its tongue.

“I was really annoyed to hear [Bellis] had won a £2,000 holiday and had used a picture of our horse without our permission,” Mitchell tells The Guardian. “He should have asked for our consent. There should be some token gesture as it is our horse that has really won them the holiday.”

“I didn’t even know that this competition was on. If I had known about it we would have entered and could have won as Betty is always sticking out her tongue.”

“Our Blue Monday competition was meant to make people smile on what’s been deemed the most depressing day of the year and we’re sorry to hear if it’s caused any upset with the horse’s reported owners,” the company tells Metro News. “We are yet to receive a formal complaint, but we’ll be sure to look in to it as and when we do.”

Despite questions over foal play, Mr Bellis and his family will be getting the £2000 holiday prize they won after entering our #MadeMeSmile competition. Hoof a great holiday!

David is also defending his son’s right to shoot the photo and win the contest with it, saying that the horse is seen by passersby on a public path to a local school. The family is planning to use the money for a vacation — their first one together.