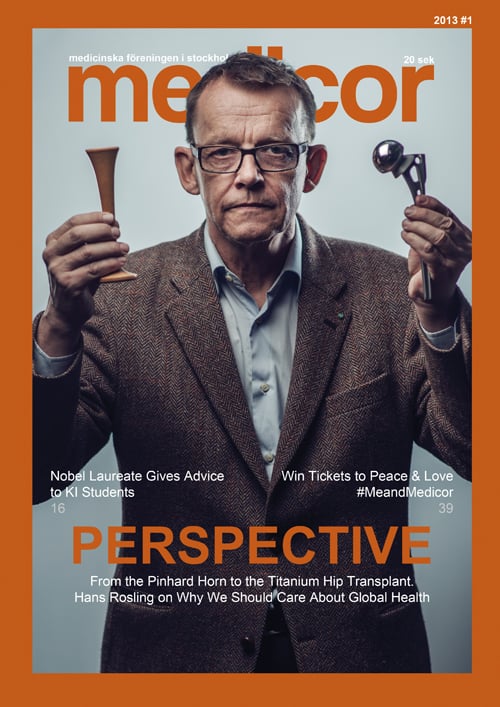 My friend Gustaf Drevin and I are the Editor and Creative Director (respectively) of Medicor, the student union magazine of the Swedish medical university Karolinska Institutet. Long before we even got involved with the publication, we had dreamed up this ‘fantasy’ issue where we would have a huge cover story featuring Hans Rosling, the founder of Gapminder and one of TIME’s 100 most influential people in 2012.

We would have a minimalistic design, and we would have great photos; we even wanted to have a launch party with Bill Gates, but that’s a story for another time. After Gustaf became the editor for Medicor, we finally got the chance to realise our fantasy. This is the story of how we got Hans Rosling on the cover of Medicor.

Getting a Hold of Hans Rosling

Our first challenge was obviously to get a hold of Hans Rosling. So Gustaf decided that he would try to call him. After a couple of weeks, Gustaf got into contact with Rosling’s secretary and finally managed to get a hold of his private cell phone number.

Gustaf books a phone meeting, and a couple of weeks go by. Then, on a late Tuesday afternoon, Louise, Gustaf, and I got together and we finally do it: we call Hans Rosling.

But no one picked up.

It was 17:30; he’s probably in a meeting or something, we’ll just try again in an hour. Again, no answer. Hmm, well, we didn’t really expect him to be waiting by his phone for us to call him. So we decided to wait another hour. We sat around at MF, speculating on what Rosling could be doing and why he wasn’t picking up. Maybe we got the time wrong? Was it the right day? After about half an hour, Gustaf couldn’t take it anymore, so he decides to call again. We hear a, “Hallå?”

At this point, Louise and I are jumping up and down like 14-year old girls at a Justin Bieber concert. Gustaf nervously continues talking to Rosling and all of a sudden they are discussing how biased the media is, or something like that.

5 minutes go by, 10 minutes, 15 entire minutes, and Gustaf still hasn’t brought up the topic of an interview and photo shoot yet. For the next couple of minutes, we just hear Rosling’s voice, lecturing Gustaf on how a large wave of child asylum seekers arrived in Sweden, and how that coincidentally took place a week before the annual meeting of some charity.

All of a sudden, the call drops. Gustaf tries to call him back, but his phone stopped working. I give him mine, but the call still won’t go through. I was worried that this was it, this was the interview. We weren’t prepared and we hadn’t recorded or written anything down. And to make it worse: we just hung up on Hans Rosling.

After about 5 minutes, we finally manage to call him back with Louise’s phone. Rosling just picked up where he left off, and continues to talk about the wave of child asylum seekers like nothing had happened. This goes on for 15 minutes, until Gustaf finally gets the chance to interrupt him: “It’s issues like this that we want to share with the students at KI, and therefore we’d love to have an interview with you”. Gustaf looked like his heart stopped. And I think mine might actually have. After what seemed like an hour, we hear “Sure”. “Sure”!?! What? Hans Rosling just said yes to an interview!

Then something happened. Gustaf suddenly turned pale. Louise and I are still cheering and congratulating each other. Gustaf turns to us and says “He wants us to come now“.

What? Now? We had spent the last couple of weeks trying to get a hold of Rosling, but we had completely forgotten about preparing for the actual interview. Gustaf proceeds to ask him about having his picture on the cover and we hear a short “No, I don’t think so”. Well at least we got the interview, but what are we going to ask him? We look at each other nervously; we’re completely exhausted, we hadn’t prepared anything at all, and I was sweaty from all the jumping. This was a nightmare.

Gustaf tried to convince him that tonight wasn’t a good time and that we should reschedule for April (this was in March 2013). Rosling was persistent; he explained that he was out of town a lot, and that he just happened to have time today. After another 15 minutes, he finally suggests that we meet him at the Global Health conference in Stockholm a few weeks later, and that he’d present us to Richard Horton and the Ethiopian Foreign Minister. Kaching! Yes! That! We want that! Say yes, Gustaf! Gustaf, say yes!

We couldn’t believe what had just happened. We ditched preparing for our seminar and just sat down at a restaurant. We had just started at KI, had just started with Medicor, and now we were interviewing a Times 100 personality. This was very exciting. I don’t think any of us got a lot of sleep that night.

Preparing for the Photoshoot

Right after the phone call with Rosling, I sent off an email to Magnus Anclair at Svenska Läkarsällskapet who was in charge of the conference, Global Health – beyond 2015. They were kind enough to provide us with press passes, and even allowed us to have a small photo studio set up in the conference area. Score!

At this point, I had met Martin Kjellberg, who is a professional director and photographer, that I bumped into at a meeting for another society at Medicinska Föreningen. I asked him if he wanted to help with photographing Hans Rosling, which he was happy to do.

What about the photography gear? We really didn’t know what the lighting conditions would be like, so strobes were a no-brainer. Between Martin and I, we owned enough gear to set up a small studio, but I was looking to get a couple more studio strobes, because we really couldn’t risk our gear malfunctioning.

I had worked with Rajala Pro Shop back in Malmö before, and so I called and asked the Stockholm office if they wanted to sponsor the photo-shoot and provide us with some photography gear. Surprisingly, they said yes! They were extremely generous and provided us with all kinds of stuff, studio strobes, backgrounds, stands, all the good stuff.

So now we had press passes, two photographers, and camera equipment. Things were looking good.

Coffee and All the Risk Factors

After the whole day, after the whole conference, we finally got him at the “studio”. Here he was. This was it. The first thing he asks is “Is there coffee? I’d like one with sugar, cream, all the risk factors.” Not only did we have the Hans Rosling, a photo shoot with Hans Rosling, here he was making jokes with us. We all started laughing and it took us a while before we could take in the moment and act rationally.

It took a while until we realized: “Oh right, coffee!”. So Louise and I run as fast as we could, across the hotel, to look for coffee. We find the break room that has a big “Staff Only” sign that we ignored. We ask for some coffee and say that it’s for Hans Rosling. No questions asked, they gave us coffee and lots of ‘fika’. (Thanks Mr. Bartender at the Radisson Blu Waterfront Hotel!)

He Brought His Own

After we brought the coffee, we explained to him that we’d love to take a picture of him for the cover. He then drops this: “I strongly oppose faming people. I want people to know my work, not me”. Oh no. “Well, this will really help attract more readers to your interview, where we will be talking about your work”. Nope, he didn’t buy it. Finally, he threw us a bone and agreed to being on the cover if we focused on his work, instead of him; hence the pinard horn and the hip transplant.

Speaking of which – we had actually planned several different photo ideas. We had imagined that he would be holding a ball/sphere, resembling one of the circles in the Trendalyzer graphs, with a graph that we would Photoshop into the background. Louise had even been walking around in Stockholm during the day to find suitable objects (you can see the orange on the table).

But Rosling was prepared. He had brought an entire bag of props and before we even had a chance to present our ideas, he was already lining them up on the table. As photographer Brian Smith would say “The photo-gods were smiling at us” that evening. From saying no to having his picture taken, here he was, lining up a whole collection of toys and props. And he was passionate about it. Hans Rosling was passionate about having us take his picture!

He is a Very Tall Man

During the day, we worked with setting up the strobes and the background so that we didn’t have to keep Hans Rosling waiting. We estimated that he was about as tall as me, so I acted as a stand-in for Martin to adjust the strobes. It turns out that Hans Rosling is taller than me. A lot taller. In fact, the light stands couldn’t reach high enough; I had to stand and hold it up to get the light we wanted. Martin actually had to stand on a box that we found, to be level with Roslings face.

I think the highlight of the day was when we were shooting the picture of Hans Rosling holding the pinard horn and the hip transplant (to juxtapose the extreme difference in health care standards). At first, Hans was smiling and looking enthusiastically into the camera. While Martin and I were reviewing the shots, we decided that we wanted a more serious look.

Martin then proceeded to take pictures again, and asked Rosling: “Maybe a more serious look would be…” Before Martin even finished his sentence, Rosling interrupted his own laughter, took a breath, and turned dead silent and just stared right into the camera. Completely serious. I couldn’t hold myself from laughter. None of us could; Martin almost dropped his camera, laughing. Still, Rosling kept his straight face, and there it was: our cover photo.

About the author: Jingcheng Zhao is a medical student and an award-winning photographer based in Stockholm, Sweden. Visit his website here and his blog here. This article originally appeared here.

That’s No Way to Treat a Perfectly Good Viewfinder!