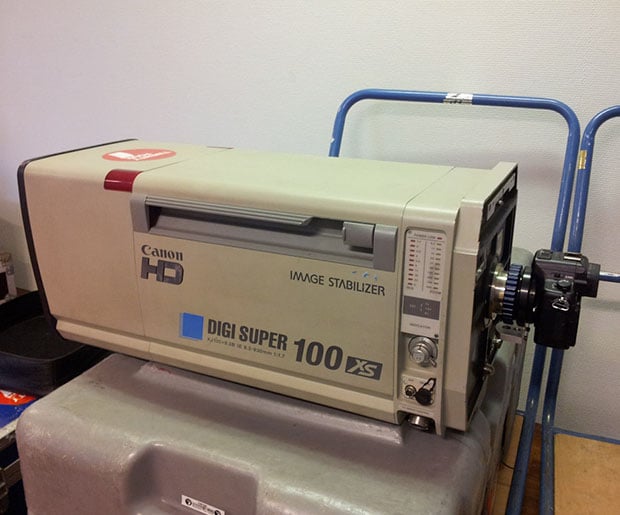 Check out this photo of a gigantic Canon 9.3-930mm broadcast lens mounted to a tiny Panasonic GH2 mirrorless camera. The size difference is so great that it might be more accurate to say that the camera is mounted to the lens.

The photo was snapped by an equipment rental company employee named Esben Garn, who tells us that the strange-looking combo is “not very practical to get around with,” and that you’ll need external power to use the lens, which costs over $200,000. 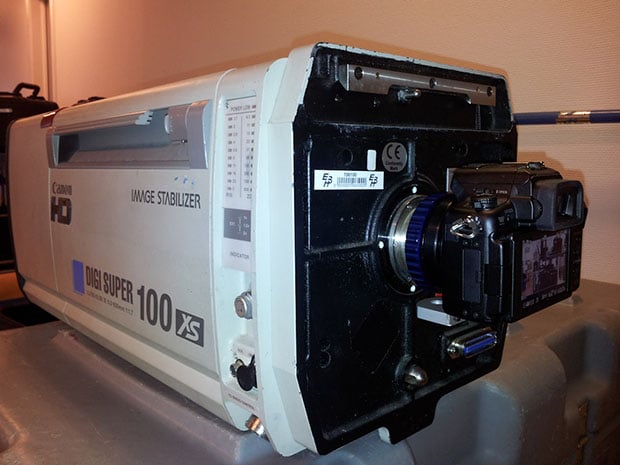 Garn started playing around with mounting different lenses to Micro Four Thirds cameras after finding a shop in Poland that creates adapters for mounting all kinds of lenses to MFT cameras.

After purchasing the B4 to MFT adapter for this monster lens, Garn found that the image from the lens doesn’t cover the Four Thirds sensor of his camera. His two choices were to (1) use the built-in 2x extender in the lens (which works similarly to Canon’s new 200-400mm), or (2) to use the GH2’s Extra Tele Conversion (EX Tele) to only use a portion of the camera’s sensor.

Garn says he prefers using the teleconverter because it helps give his photographs a “milky haze.”

In addition to having an ordinary power source, the lens can also be powered by a portable external battery. The zoom of the lens, which a powerful 100x magnification, is controlled using a wired remote. The lens is also parfocal, which means that once focus is set, you can zoom in and out of the scene without having to refocus the lens.

How well does the lens work? Garn tells us that the best image can be had at f/4, but overall the lens is not very practical (pretty obvious, right?). There is some chromatic aberration present in resulting photos, and there’s a sharp quality drop off at the edges of the lens.

Unfortunately, we weren’t able to obtain any sample photographs shot using this strange kit. If we do get our hands on some in the future, we’ll update this post to show you what the lens can do.

P.S. You could probably put a larger “lens” on a mirrorless camera by attaching the camera to a giant telescope, but our title is referring more to ground-based lenses. For other behemoth lenses we’ve featured in the past, check out this Canon 5200mm lens, this “world’s most expensive” Leica 1600mm, and this 1700mm Zeiss lens.

Image credits: Photographs by Esben Garn and used with permission