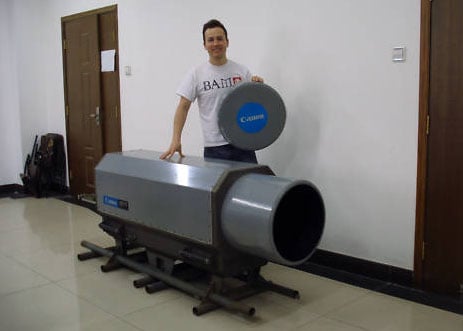 
Here’s a screenshot, in case the listing is removed:

Here’s an old advertisement that was displayed on the auction, demonstrating the power of the lens: 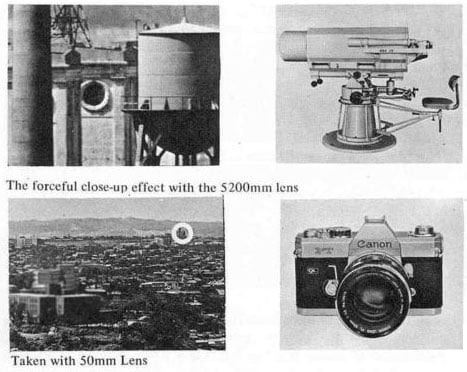 For an even better idea of how powerful the magnification of this lens is, here’s a video made with the lens attached to a video camera:

Some of the facts and figures listed in the auction and on the video page are pretty interesting… The lens has a minimum focusing distance of 393ft/120m. It weighs 220lb,100kg without its stand. In a flyer promoting the lens, Canon states that,

This is the only ultra-telephoto lens in the world capable of taking photographs of objects 18 to 32 miles away (30km to 52kms away). Having a focal length of 5200mm, Canon Mirror Lens 5200mm can obtain one hundred times as large an object image as that of a 50mm lens.

What’s even more interesting, is that if used with a DSLR with a crop factor (i.e. Canon 50D), the lens is effectively a 8320mm lens. Wowzers.

Obviously, this lens isn’t very practical for things aside from spying on someone across a city, or staring at some portion of the moon. It seems like the lens would primarily be used for astrophotography. Can you think of any other examples of where this focal length could be useful?