If you ever get a chance to photograph or film the launching of a virgin ship hitting the water for the first time, make sure you stay at a safe distance. The short 18-second-video above shows what can happen if you bring your camera a little too close to the action.

The man who captured the video, Jason Bundoff, writes,

Ship side launch goes wrong resulting in a debris filled wave taking me and my camera out.

The ship in the video is the Reuben Lasker, a fisheries survey vessel is owned by the National Oceanic and Atmospheric Administration (NOAA). It was launched in Marinette, Wisconsin on June 16, 2012.

The video shows that wood from the cradle holding the ship disintegrated as the ship dropped into the water, and that the powerful splash projected the wooden planks toward the dock.

According to the Daily Mail, Bundoff escaped with scratches and bruises. MSN reports that NOAA will no longer be letting spectators stand as close to the launch in the future. 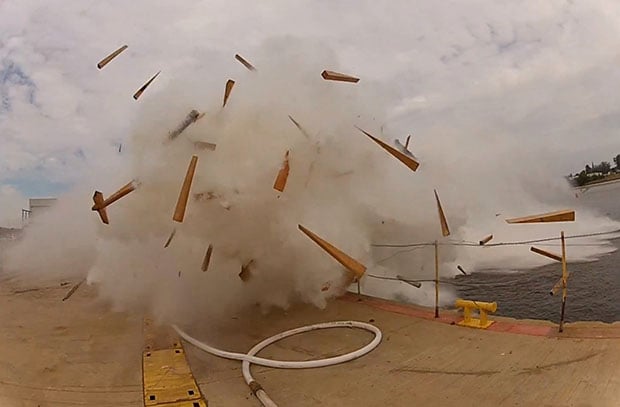 Here’s NOAA’s official video showing the ship launch, captured from the other end of the ship:

As you can see, there were photographers and cameramen on the other end as well, but there wasn’t a powerful splash (and/or flying debris).