Think Tank Photo is putting together a brand new video series in which producers and Think Tank Photo co-founders Kurt Rogers and Deanne Fitzmaurice catch up with some of the world’s top photographers and photojournalists.

The series is dubbed “About a Photograph,” and in it some of the best photographers of our time tell the stories behind their best known and most influential photographs.

In this first installment, Rogers and Fitzmaurice sat down with Agence France-Presse photojournalist Saul Loeb and asked him to tell the story behind his “Presidential Hug” photograph. In it, a Florida pizza shop owner (and registered republican) surprises President Obama by giving him a huge bear hug and lifting him off his feet. 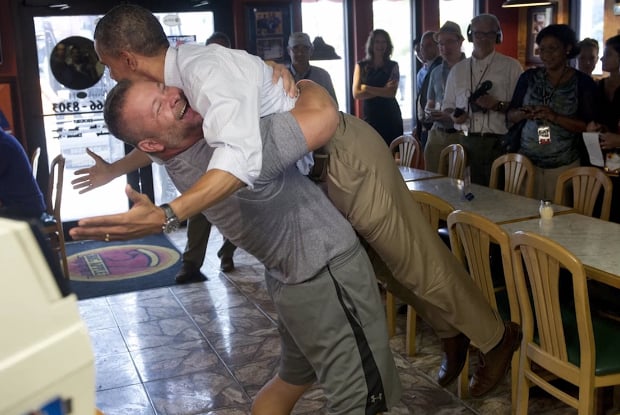 In the video, Loeb talks about the shock he and the other photographers who were following the president around felt when this happen, snapping away and hoping that their camera settings were right because there was no time to change anything. Loeb also stole a quick glance at the Secret Service, who must have been moments away from all-out panic mode when this happen.

Speaking of the series as a whole, Rogers explains:

‘About A Photograph’ allows photographers, students, teachers, historians, and others to get inside the heads of these expert photographers at that fleeting moment of creation. The images being featured range from the beautiful to the tragic, from the humorous to the informative. The one trait they share is that all are memorable and capture the essence of visual storytelling.

The “Presidential Hug” BTS is the first and only video that has been uploaded to the series thus far, but if you want to keep up with About a Photograph as Think Tank Photo continues to add more installments, head over to their blog by clicking here.

Inexpensive ‘Infragram’ Camera Lets You Take a Peek at Photosynthesis