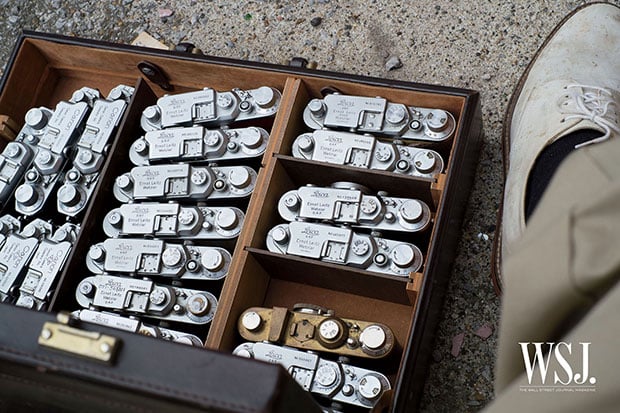 Want to see what the camera arsenal of a world famous photographer looks like? A photographer whose work fetches millions of dollars at auction?

Check out the photograph above (larger version here). It was shot by photographer William Eggleston for WSJ Magazine, and shows just a portion of Eggleston’s extensive camera collection.

Eggleston’s owns three cases filled with cameras, and this is just one of them. This particular case holds 13 different Leica cameras and a bunch of Canon cameras. The case itself is a leather briefcase that was retrofitted with wood panels.

The photographer tells the WSJ that the collection “has grown into something of an obsession.” He currently has about 300 cameras in his collection.

The photograph above was shot by Eggleston using a Fuji X-Pro1 — a very rangefinder-like camera — for the June 2013 issue of WSJ Magazine, to be included in the May 25th, 2013 issue of the Wall Street Journal.

You can find this photograph and a collection of Eggleston’s most famous images over on the Wall Street Journal‘s Photo Journal.