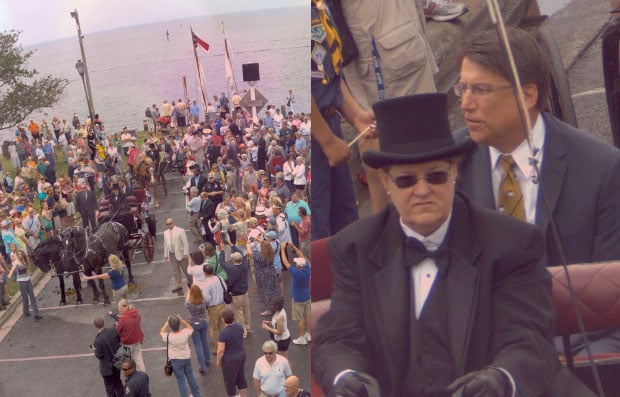 Remember that 50-gigapixel camera being developed by Duke University scientists? Since we reported on the project last year, researchers have created a spin-off company called Aqueti for bringing the technology “into the world for everyone to experience.” The camera they’ve developed will soon be making public tours, and we’re starting to get a peek at what it’s capable of.


Team member (and PetaPixel reader) Scott McCain tells us that they used their prototype Aware2 camera this past weekend to take a picture during Edenton, North Carolina’s 300-year anniversary celebration. With a single exposure, they captured this 300-megapixel photograph of North Carolina’s governor:

The photo is embedded as an interactive, zoomable image, so feel free to dive into it to enjoy the camera’s crazy resolution. (You’ll notice that the team also embedded a couple of other shots they snapped over the course of the day.)

The secret behind the Aware2 is that it uses 160 individual microcameras that each have a 14-megapixel sensor. Thus, each snap captures 2.24 gigapixels of raw photographs. These images are then stitched together into a smaller ~1 gigapixel photo measuring 55,000×18,000 pixels. (The prototype photos seen above are smaller than this.)

These gigapixel photos have a panoramic field of view that’s similar to the human eye, yet you can zoom into them with the power of a large telephoto lens. The team is still working on improving the exposure and focus abilities of the camera, but claim that the current quality is roughly comparable to consumer DSLRs.

Here’s a prototype camera that the team recently showed off at a local farmers market. A new iteration of the camera this summer will be 1/3 of the size of this one: The price point of the camera right now is quite high — McCain compares it to a TV broadcast camera — so it’ll likely be something that’s rented out for special purposes and events rather than something you’ll be able to keep on your shelf.

You can find out more about the camera and the campaign over on the Aqueti website.