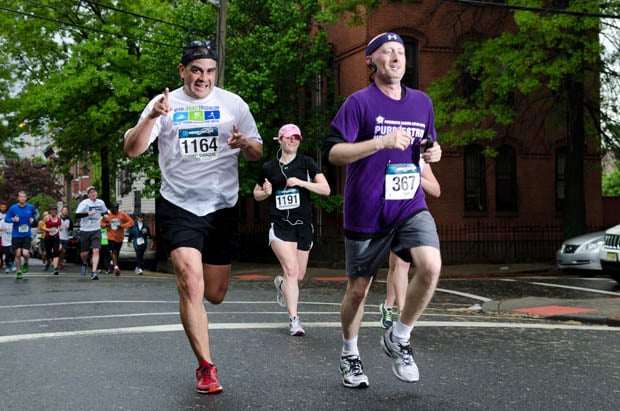 Lately I’ve been looking for ways to photograph people besides just my friends and family. I was super inspired after reading photographer Peter Waterman’s account of photographing 80 people in 1 day. I’m a hobbyist just looking to improve my skills and have fun. I like to get the best bang for the buck with my equipment purchases and keep my gear budget contained.

I checked my town’s local event website and noticed there was a 10K run scheduled for the upcoming weekend. I had never shot a sporting event before; I usually just shoot portraits and travel. The race map showed the course went right by my house so I had a perfect opportunity to take some pictures.

I wanted to experiment and practice with lighting so I made a list of different strategies I could use. I thought about using umbrellas to soften the light, a boom stand to get the light right over the runners heads and using multiple flash locations. When race day arrived it was raining on and off so I changed my strategy. I used a single light stand with a 3 flash bracket. I used 2 YN560II and 1 YN560III flashes on the single bracket. I shot them all in manual, zoomed all the way out (24mm) and ½ power each. Shooting on half power kept my recycle times quick, and extended the number of flashes the batteries could handle.

I decided to use no lighting modifiers due to the weather. Going bare flash helped keep the light intensity up since I did not lose any light through the umbrella. I did place a clear plastic sandwich bag over each flash to protect them from the rain. That worked great. I used my trusty YN-603N remote trigger on a Nikon D5100. I got to the race about 10 minutes before it started, so I didn’t have much time to experiment with different lenses. I set up my lights and got in a few test shots. I used manual exposure, ISO 100, 1/200th, varying the aperture from f4 – f5 to control lights. At first I had my 50mm 1.8 mounted which was not wide enough for the position I was shooting from. I quickly switched to a 35mm 1.8 just before the first runners arrived.

It turns out I was lucky it was overcast and rainy for most of the race. This allowed me to use the little speedlights to add enough light to be visible in the photo. The sun came out for a few minutes near the end of the race and overpowered my little flashes at the max sync speed of 1/200th of a second. 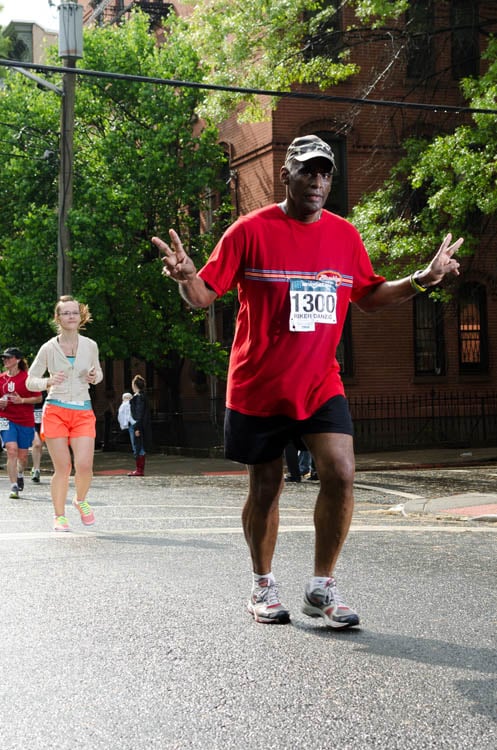 I used continuous focus, which I don’t have much experience with. Usually I use single servo – single focus point, and half press until I’m happy with the focus. In this situation I had to try to keep the focus point over my subject while they ran by. This was harder than I expected.

Reviewing later on the computer, I noticed that about 60-70% of the shots were in focus with this method. The hardest part was choosing a subject when there were large groups of runners. There are so many competing interests I found it tough to make the split second decision about who to focus on. 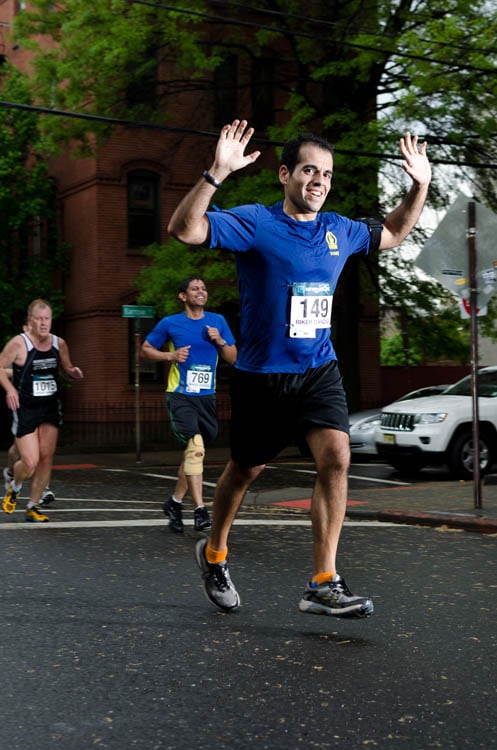 Things to Try Next Time I had the most fun interacting with the runners. I had my lights set up on one side of the road and I shot most of the time from the other side. Some people would see the flashes going off as they approached, and assume the lens was inside the flash. I could hear some people talking to their running mates saying “the camera is over there”. At that point they would turn toward me and pose. It was interesting to see the general public’s understanding of off camera lighting. Some people grasped it right away, and looked me dead in the lens, ignoring the lights. Others would solely focus in the direction of the flashes.

One runner called out to me and said “That is an awesome setup”. That made my day. It is good to know there was at least one other strobist in town today. 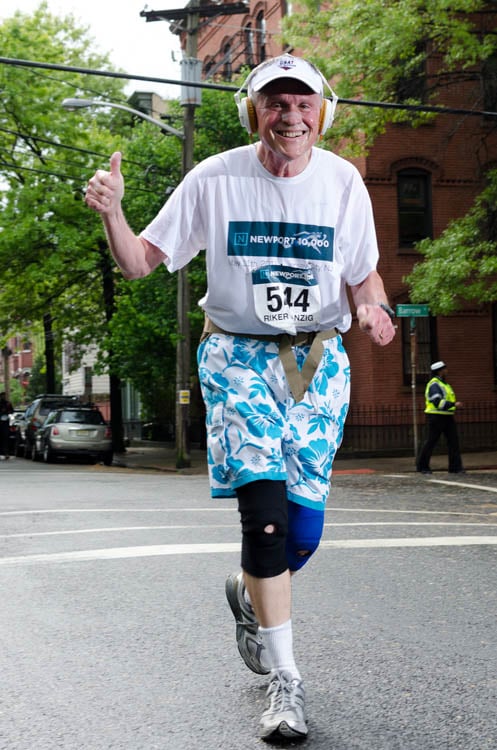 I found myself dead silent for most of the race as the more competitive runners went by. As the more social participants passed near the end, many called out and said friendly things. I found myself just smiling back at them, when I realized I should be talking back and interacting. At this point I started to draw attention to myself when runners were looking at the flashes instead of me, and just generally having more fun. I learned to be more open and talkative next time, which I hope will help capture better images.

For many of the everyday people (not pro runners) I could tell the light stand with flashes going off made them feel special and brought a smile to their face. As a former mid-distance runner, I am glad to be able to give them a little mental break from the race, however brief. I had a blast shooting and going through the pictures afterward. I was able to find Facebook pages of many of the local running clubs where I was able to post photos. I got very positive feedback from the community.

I hope this helps/inspires someone to try off-camera lighting at a road race or sporting event nearby. If you try it, I would love to read about your experience, set up, and see how the photos turned out.

About the author: Paul Eichengrun is a photographer based in Jersey City, New Jersey.