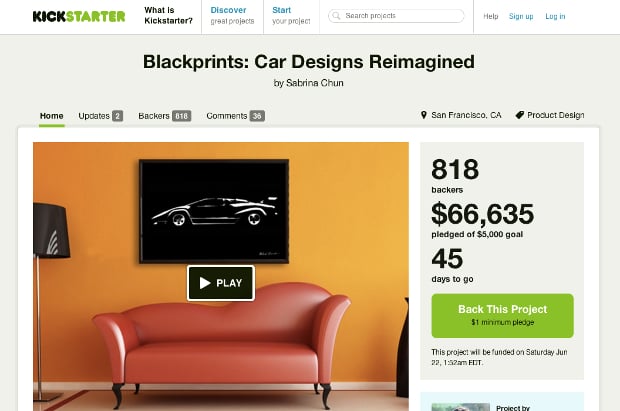 The wildly successful Kickstarter campaign Blackprints is currently at the center of a heated controversy over stolen images that has already involved one copyright dispute. It seems that the campaign’s creator, Sabrina Chun, might have taken to acquiring photos of cars off of the Internet, changing them to black and white minimalist versions, and selling them as part of this campaign. (See Update)

According to A Photo Editor, the issue was first brought to light when someone noticed that the minimalist print of a Shelby Cobra that Chun was using was actually a black-and-white version of photographer Bruna Ratensperger‘s work.

This led to a copyright dispute that got Blackprints taken down momentarily, but the campaign is now back up using a less identifiable Shelby image alongside the rest of the prints. 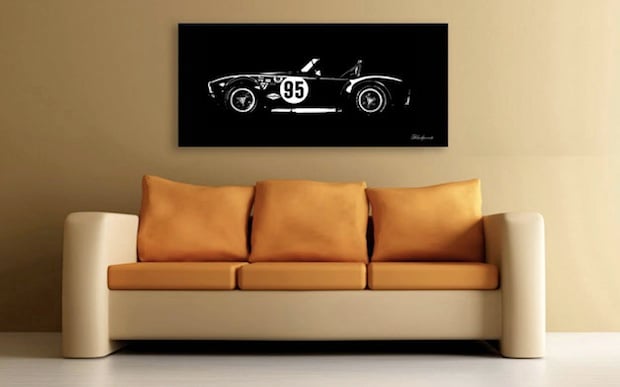 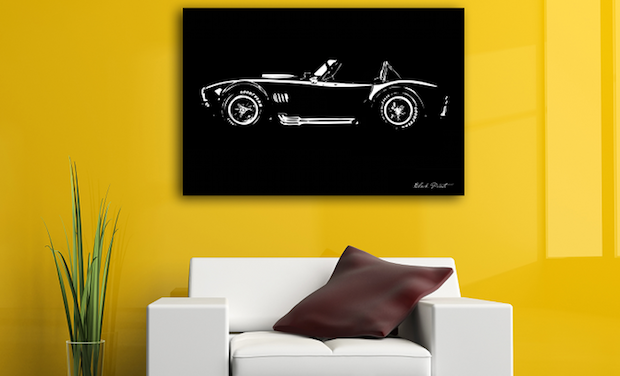 It would be easy to say that Chun is obviously in the wrong here, but the recent ruling regarding Richard Prince may have some judges actually siding with her if this was to go to court. Who’s to say the minimalist versions don’t convey “a new expression, meaning or message?”

And if she were in the UK, she could always argue that she found the photos as orphans online. Needless to say, recent copyright legislation seems to open up a can of worms regarding whether or not Chun’s use would be classified as fair … let us know what you think.

It’s hard to say whether the remainder of the photos she is using are fair game or not, but [see update below], which has already raised a whopping $66,000 (the goal was only $5,000).

To see if you recognize any other copyrighted photography being used as part of the campaign, head over to the Blackprints kickstarter page by clicking here.

Upadate: Since posting this article, we have received an email from Mrs. Chun responding to the copyright allegations. Here is the section of that email in which she clarifies a few points:

I’d like very much to address some things on your latest blog post regarding myself and my Blackprints project:

1) Yes, I did erroneously take Bruno Ratensperger’s photo, but I had only intended to use it as a tribute because that particular car, the #95 Cobra, is a very famous one. The image was originally a free downloadable wallpaper via Autoblog, and I acknowledge that it was my mistake to believe that it was free intellectual property. However, Bruno and I spoke over the phone and we resolved the issue. Also, I had addressed this as well, via blog posts and updates multiple times to anyone who had inquired about it, as it was indeed my mistake.

2) The photos are all mine, as I literally have hundreds of my own car photos. For example, on my blog posts here and here. Additionally, all background photos are obviously purchased stock photos.

Glassagram Introduces Google Glass to the World of Retro Filters