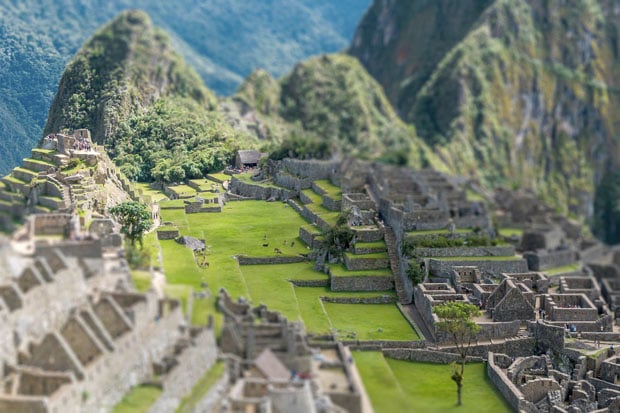 New York-based photographer Richard Silver is a passionate traveler, and his primary goal as an artist is to share his life experiences by creating beautiful photographs during his travels. Rather than shoot traditional photos, he uses techniques such as tilt shift, HDR, panorama, and time-slice in order to capture the world in eye-catching ways. Last year we shared his time-slice photos of NYC, which showed day turning into night in single photos.

Another major project he has been working on is called “Tilt Shift.” He has been photographing some of the world’s most famous locations and turning them into miniature scenes.

The project contains photos snapped in locations ranging from the famous structures of Machu Picchu (as seen above) to runners streaming down a road during the New York Marathon.

The photographer tells us he was inspired by the tilt-shift work of Italian photographer Olivo Barbieri. However, instead of using an actual tilt-shift lens, Silver shot “normal” photographs and then applied an artificial shallow depth of field to the images using Photoshop during post-processing.

“I appreciate the freedom that digital gives me especially with this ongoing project,” he says.

So far, Silver has already visited all 7 New Wonders of the World (one of the lists, at least), and has applied this tilt-shift style to all of them.

Silver’s photographs are now being exhibited in galleries located in many of the countries he has visited (over 50 of them around the world).

You can find more photographs from this series over on Silver’s website.

Creative Music Video Shot Entirely in the Reflection of an Eyeball