Created by photographer Peter Basma-Lord, the Eternal Light Mac and iOS app offers users a way to play back an infinite number of photos in a slideshow format, set to music, at any speed they like. If you so chose, you could select every single photo you have hidden deep within all of your external hard drives and play them back at breakneck speed — a sort of, near-death experience slideshow if you will.

And even though this may not seem like something one would want to do, it’s actually the idea that inspired Lord to create the app in the first place.

Lord decided to create Eternal Light because of a desire to re-experience ever photo he had ever taken chronologically. He wanted to create software that would “simulate a near death experience — a wild stream of all visual memories of my life.” The result, much further down the line, was Eternal Light. 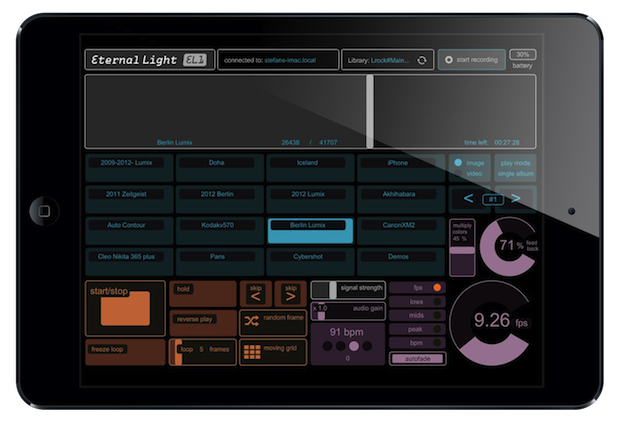 Lord wanted to create an app that would, at its core, be about pulling the images we’ve lost into the digital haze of zeros and ones out into the light once more. Using the app, you can select an infinite number of photos, set them to music, and create a custom slideshow that you can control (optionally) from a comprehensive control panel iPad/iPhone app.

Here’s a short video intro to the app followed by the project’s Kickstarter video. Fair warning, the first contains a racy photo or two and the second drops a pretty epic F-Bomb near the beginning (this ain’t your grandma’s Kickstarter promo …):

Now that the idea is established and working in prototype form, Lord has taken to Kickstarter to fund the project so he can develop actual non-beta applications for OS X and iOS. To do that, he needs to raise £22,000 (about $35,000), of which he has so far raised only £1,500 (about $2,200). Rewards for those that choose to help out include everything from thank you’s, to copies of the app, to one on one set up sessions in Berlin.

To help make sure that Eternal Light gets a chance to bring your pictures “out of the darkness” (as their campaign says), head over to Lord’s Kickstarter page sometime within the next 22 days with a pledge level in mind.

(via John Nack on Adobe)